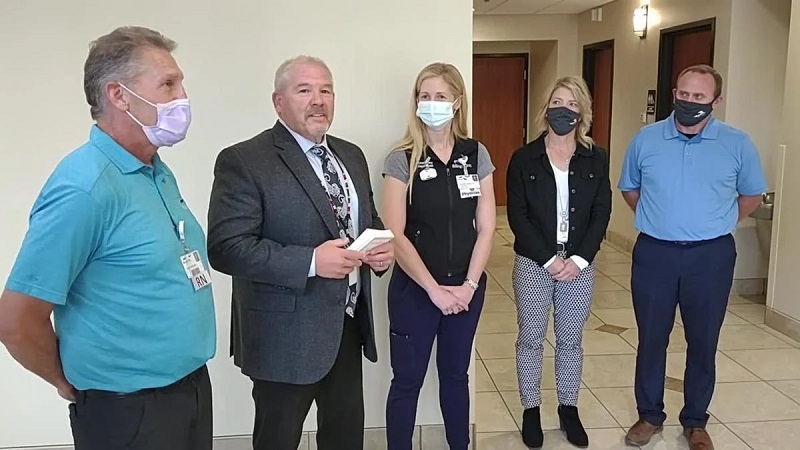 Billings, Montana – Staff members are still recovering more than ten days after an armed incident occurred inside the Billings Clinic Emergency Department. Before a police officer shot the woman, she had threatened to shoot herself while carrying a loaded gun into the emergency room.

In that instance, neither hospital employees nor police officers were hurt, and the officer who fired the weapon is still on leave in accordance with departmental protocol.

Billings School District 2 reached out and extended their support to the emergency room personnel as the hospital staff struggles to recover from that horrible night.

Greg Upham, the superintendent, and other members of the SD-2 staff met with a handful of the medical professionals who were on duty that evening on Friday morning.

SD2 even purchased lunch for the emergency department on behalf of the entire school district as a way of thanking the medical professionals for their bravery.

We have experienced so much as a community, according to Superintendent Upham.

The COVID-19 pandemic put a burden on the local healthcare workforce, resulting in overcrowded hospitals and a general lack of staff members.

“We had reached out to our medical providers Billings Clinic, St. V’s, RiverStone Health to get us through this pandemic every time I called, they were there. They answered the phone, they did whatever they needed to do, and I felt obligated to show support for what they were going through. And I know our students and our staff feel the same way, and so recognizing when someone needs help and helping them,” said Superintendent Upham.

After learning of the Oct. 16 shooting at the hospital, Upham claimed he and district employees made the decision to support Billings Clinic in the same way they do for the neighborhood on a daily basis.

Staff at the emergency room were overjoyed to learn that the neighborhood is behind them.

Two years later, most hospital operations are back to normal; nevertheless, the emergency room was turned into a crime scene as a result of the tragedy.

Carter Klatt, a registered nurse, was in the room when the patient drew a firearm on him. It was his first night working in triage. He said it was an amazing experience.

“The first couple of minutes were pretty civil as the questions progressed. I realized that something was going wrong and then obviously the weapon was brandished and the next three seconds to everything slowed down and it was like ‘whoa! This is kind of scary. Like this is actually terrifying.’ After that it was what do I have to do to get everyone safe, we had a pretty loaded waiting room there was probably 15 to 30 people out there and another three or four staff and a couple of security officers,” says Carter.

No one at the hospital was wounded, and the issue was swiftly remedied.

While the incident was taking place, Jamiee Belsky, the medical director of the ER, and other members of the hospital staff rapidly made arrangements to continue attending to other patients.

Belsky says, “We had the entire team down here in the matter of half an hour and so, it was pretty impressive. We actually had Our CEO come down and around as well. I had two of our VPs, one was in my office calling people back and we had people building this triage area because ours was currently a crime scene. They were actually able to help us get patients to safety, get staff to safety and actually build a second triage area so we can keep the hospital running, and actually keep the emergency room running, and the entire time we can continue to take care of patients.”

Upham claims that after learning about the incident, district employees wanted to offer Billings Clinic the same assistance that they do for the neighborhood on a daily basis.

“There are people that care about you and that are here to support you, just how the community has come together, obviously the school donating lunch today and coming and showing their support,” Klatt says.

“It’s nice to see nice people. You know they are out there and you forget because you get caught up in the moment and then someone reaches out and then you’re like oh, this why I believe in people there are others like us, and it’s like yes, humanity wins man,” Jamiee says.

The wolf at the Yellowstone Wildlife Sanctuary has passed away