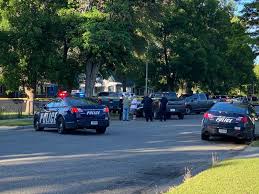 BILLINGS, Mont. – One person is dead after an officer involved shooting on the 700-block of Cook Avenue in Billings.

Assistant Police Chief Jeremy House with the Billings Police Department says the incident happened after the U.S. Marshal’s Violent Fugitive Task Force attempted to apprehend a suspect who had warrants.

Billings Police is taking the lead on the investigation at this time, but few details have been released. Assistant Chief House says no Billings officers were involved in the shooting and no federal agents were injured.