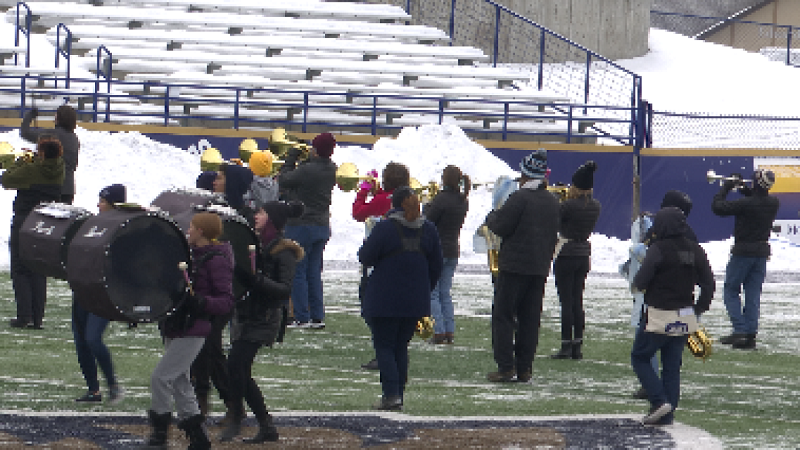 Bozeman, Montana — It’s difficult not to picture and hear the Spirit of the West marching band when you think of a Bobcat sporting event. The anticipation for College Gameday to visit Bozeman is at an all-time high.

“There’s no opportunity on campus like performing with the marching band,” says Frank, a senior at MSU. “You know you really get to channel your energy — and the blue and gold that runs through your veins and help support all the athletic teams.”

Frank has been a part of the Spirit of the West for four years, and as a senior and drum line major, he is eager to play with his fellow band members on the field, especially in light of the attention that the group is receiving on a national level.

Silas and Grace are also enthusiastic about the yearly brawl in the band, in addition to Frank.

“I’m just excited, Cat-Griz last year was crazy, and I know it’ll be even crazier this weekend,” says Grace, a sophomore and Field leader. “I’ve only ever seen it in the Griz stadium, and this stadium will just be ringing — with us and everyone else — and I’m just so excited and I know the band is too.”

Silas was thrilled to learn that the well-known pre-game show would be coming to MSU!

“It’s something very special, I’m so excited for the privilege to be here for that!” says Silas.

These band members will remember the rivalry, the pre-game show, and playing together on the field for years to come.

Cats and Griz used to brawl in Butte