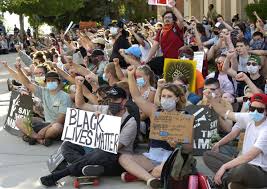 Local protests over racial equality and police violence continued Friday as thousands of people peacefully gathered in Bogert Park and marched downtown to participate in a National Day of Action for Black Lives.

Marchers carried signs that included phrases like, “Freedom from police,” “Invest in us” and “Silence equals compliance.” People could be heard chanting “Black lives matter,” and “No justice, no peace.” The majority of people were wearing masks, and volunteers passed out water bottles, string cheese and granola bars to people in the crowd.

The rally featured speakers who all denounced systemic racism and called for support for black, indigenous and people of color.

In her speech, Cox said she was tired of white passivity and wanted to see white people outraged when people of color face day-to-day abuses.

Cox called on black people to rest, because rest is an important part of resistance to white supremacy, she said.

“Our bodies have always been about production and pain,” she said. “We must put ourselves first as a full divestment from white supremacy.”

Shane Doyle, a member of the Crow Tribe and the founder of Native Nexus, a consulting group that works to implement Indian Education for All, thanked young people for their leadership and asked the crowd to vote. He said he is thankful for every breath he has.

“This is our moment to change history,” Doyle said. “We’re the moral majority.”

There were a few people who stood on the outskirts of Bogert Park, one with a megaphone, trying to provoke some people at the rally. Organizers were quick to de-escalate any confrontations.

Some people at the rally at the park declined interviews and said they’d rather a reporter talk to the people of color who were there. Others said they were to show solidarity and “validate” what people of color are trying to accomplish.

Demian Dlakic, 22, a Montana State University student, said he thought it was important to show solidarity with the movement. He said he’s heard stories about black people being marginalized here and stories of them being harassed by the police.

Dlakic said it’s an important moment in America for a lot of white people to acknowledge the division and stand with black people in solidarity. He said people are tired of seeing black men killed, and that was his reason for being at the rally.

“Many of us have the luxury of getting to pretend that it’s not happening in our town,” Dlakic said, “But it is. And we all need to do our part — whatever is that we can do.”

Gabrielle Ohanesian and Amber Wilson said they came to the rally because people of color are treated unfairly in America and all across the world. They said they just want police to stop killing black people.

“We’re all equal. We’re all the same. We might be different colors, but we’re all human, so why not get along,” Ohanesian said.

She said it was it was amazing to see people at the rally supporting black lives, considering the negativity she’s seen toward the movement everyday that makes her forget how many people support it.

“It’s really heartwarming to see how many people are with you,” she said.

Zack Blazevich, Conner Reece and Amber Sharon came to the rally together. They said they were there to support their black brothers and sisters anyway they can.

“My heart got so warm when we got here,” Sharon said. “It makes all the nasty people seem so small, at least for now.”

She said silence is violence.

“It’s important for us to speak out, in a peaceful way,” Sharon said.

After about an hour of speeches, the rally shifted to a peaceful demonstration as the groups’ organizers led protestors down Main Street and asked businesses to sign a Bozeman Freedom Pledge.

Included among the requests listed in the pledge are a commitment to anti-racist hiring practices, and training to stop implicit bias and internalized racism.

Benjamin Finegan, MTREP health, well-being and special projects coordinator, said within the first hour of the demonstration, more than 30 businesses signed the petition. They said organizers were still waiting for the final count.

Last Sunday, around 2,000 protesters attended the Bozeman Rally For Black Lives, which was organized in response to the death of George Floyd, 49, in Minneapolis. Organizers Friday estimated the crowd at more than 3,000 people.

Floyd died on memorial day after Derek Chauvin, a former Minneapolis police officer, choked him with his knee for almost nine minutes. Chauvin was charged Wednesday with second-degree murder.

During Friday’s rally, protesters downtown held nine minutes of silence for Floyd, symbolic of the nine minutes Floyd was pinned beneath Chauvin’s knee before he died.

“As Bozeman grows and becomes increasingly diverse, and especially racially diverse, our community must grow in it’s commitment to anti-racism,” stated a press release from event organizers. “Bozeman is not immune to the incidences of racial violence that have taken the lives of George Floyd, Tony McDade, Breonna Taylor and countless other black people around the country.”

Friday would have been Breonna Taylor’s 27th birthday, had she not been shot while sleeping in her own home in Louisville on March 13, just a month and a half before Floyd was killed in Minneapolis. Some protestors held signs commemorating Taylor and celebrating her birthday.

The protest and demonstration also brought out counter-protestors, some of whom were armed. Volunteers urged protestors to avoid confrontation with any of the counter-protestors and, if a situation escalated, to find one of the trained volunteers to help de-escalate issues.

No major skirmishes occurred between protestors and counter-protestors.

“Intolerance reflects on all of us, and there is no place for bigotry or racism in Bozeman or Montana or anywhere,” said a statement released Friday by the Bozeman City Commission. “As we have witnessed the racial injustice against George Floyd and others, we must reaffirm our commitment to Bozeman being a welcoming community.”

The statement said the city would review its practices, including training for police and city employees, de-escalation policies and hiring practices.

Bozeman’s rally and demonstration was organized in response to the deaths of George Floyd, Tony McDade, Breonna Taylor and other black, indigenous and people of color across the nation.

Since Floyd’s death, peaceful protests and riots that have turned violent erupted in all 50 states and in other countries.

On the corner of Main Street and Bozeman Avenue, a man who declined to give his name supported the rally by getting down on both knees and raising his hands as rally goers passed.

The gesture was one of solidarity. He said it was the same way Floyd surrendered to police when he was “executed” while in their custody.

The man said it was inspiring to see so many people attend the rally and that he hoped it sent a message to politicians.

“The current state is not acceptable,” he said. “People are asking for reforms.”