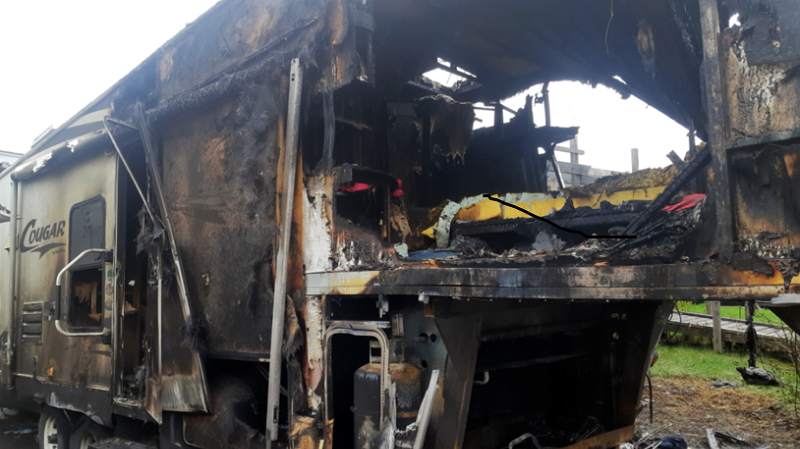 Bozeman, Montana — On Saturday, January 7, flames overtook a travel trailer being utilized as housing off of 19th in Bozeman.

Immediately following the news of the fire, MTN News captured flames shooting out of the trailer.

On Sunday, MTN’s Jane McDonald followed up with witnesses to determine what transpired.

Trailer and RV fires are an issue that, according to Bozeman Fire battalion Chief Travis Barton, has gotten worse over time.

“My roommate and my fiancee were coming back from playing a couple of games of pool down at ponderosa and we saw the flames and wanted to stroll by. It’s just more and more of these trailers have been popping up and as the weather gets colder there’s people burning propane and are really running a risk they may not know of because something like this can happen,” said Gary.

A battalion chief and one engine responded to the incident. The flames were put out in less than 15 minutes with no injuries. The cause, according to Battalion Chief Barton, was a temporary heating device.

“That’s kind of the story of ultimate loss. I just drove by it again today as we were on the way to the gas station to fill up the truck. It was a somber feeling, nobody milling about. I wish there was something we could do about it,” said Gary.

People are urged not to use homemade heaters in enclosed locations, according to Battalion Chief Barton.

Gary said he will remember one thing about watching the flames: “A lot ran through my mind. More than you probably have time to hear about. What’s the city going to do about this ongoing problem that’s not just here behind Townpump and Winco, but behind lowes, behind Kenyon, anywhere where there’s a street like this, a field like this, that developers are waiting to hit? And umm is everyone ok?”, said Gary.

Whole Foods announces the launch date of its Bozeman facility