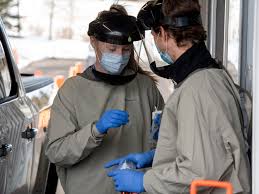 Montana officials have confirmed cases of a variant of COVID-19 in Gallatin County. It’s the first confirmation that the new strain of the virus has reached the state.

The Department of Public Health and Human Services has confirmed three cases of the U.K. variant of the virus in samples taken from Gallatin County. The news was first reported by the Montana Television Network on Wednesday.

Gallatin City-County Health Officer Matt Kelley said in a statement late Wednesday that the county is working with the state to investigate the source and timing of the specimens that showed signs of the variant.

He also said the finding shouldn’t come as a surprise.

“Well over 40 other states have identified the virus, so it stands to reason that it is in Montana as well,” Kelley said. “This is a good reminder that this pandemic is not over and the importance of everyone doing all they can to help us slow down transmission.”

Jon Ebelt, a DPHHS spokesperson, said in an email that the state has been conducting surveillance for the variant strains for weeks. He also said the three people who had the variant have recovered.

Montana Gov. Greg Gianforte said on Twitter that the state has been “preparing for this for some time.”

“I encourage Montanans to continue to practice personal responsibility to protect their health and the health of their loved ones,” Gianforte said.

The U.K. variant was identified in the fall and was first detected in the U.S. in December. It’s known to spread more easily and quickly than other variants, according to the Centers for Disease Control and Prevention.

It has been linked to more than 2,500 cases in the U.S., according to the CDC. Montana was the 46th state to confirm the its presence.

Studies suggest the antibodies produced through vaccinations recognize the variants.

The finding comes nearly a year after the first cases of COVID-19 were confirmed in Montana. The state has seen more than 100,000 cases since then and 1,373 deaths from the disease.

Woman pleads guilty for death of infant daughter in Butte