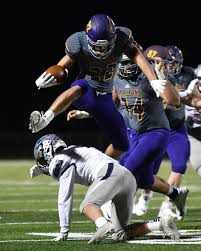 MISSOULA — The offer ended up being too good to refuse for Soren Syvrud.

The Missoula Sentinel senior committed to Montana on Thursday to become the 18th-known commit at the time in the 2021 recruiting class. He had been unsure if he wanted to play college football, but he chose to play for his favorite team since childhood and alongside his friends from Sentinel.

“I chose Montana because I have grown up watching (them) every Saturday,” Syvrud told 406mtsports.com. “I’ve been a Griz fan ever since I was born. When I saw four of my current teammates commit, I knew it would be awesome for all of us to go together and continue to compete. UM has a championship culture and the coaching staff is amazing.”

Syvrud is the fifth Sentinel senior to commit to the Grizzlies, joining safety Jace Klucewich, athlete TJ Rausch, linebacker Geno Leonard and quarterback Camden Sirmon. Each of them played a pivotal role in helping the Spartans win their first State AA title since 1972.

Syvrud said he’s being recruited as a preferred walk-on defensive back. He earned first-team all-state honors at running back and outside linebacker this year, and he shared Western AA defensive MVP honors with Leonard. In 29 varsity games, he had 82 tackles, 16 tackles for loss, 11 pass breakups, 4.5 sacks, four forced fumbles, two interceptions and two fumble recoveries.

Syvrud also stars on the basketball court for Sentinel but wasn’t going to play that in college, so it was either football or nothing. He also had offers from Div. II teams and all the in-state NAIA programs.

“Been a Griz fan forever, so I had to take the opportunity,” Syvrud said.

Syvrud has attended home games for as long as he can remember with his family. They had season tickets, leading to him having the opportunity to take a pregame photo on the field when he was about 4 years old, making it look like he was the only person in the stadium.

“Turned out pretty cool,” Syvrud said. “Didn’t think I’d be playing on that field one day.”