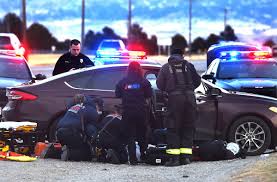 UPDATE: The shooting victim found by police while responding to a call over the weekend has died. The incident is now being investigated as a homicide.

Lt. Brandon Wooley with the Billings Police Department says a person of interest has been identified, but no charges or arrests have been made at this time.

Wooley says the investigation is ongoing.

The county coroner will be releasing the victim’s name at a later time.

BILLINGS, Mont. – An adult man was transported to the Billings Clinic after he was found by law enforcement unconscious with a possible bullet wound.

The Billings Police Department reports they responded to 341 Sioux Lane in reference to a shooting at 2:11 pm.

When officers arrived on scene, they found a 29-year-old Native American man lying face down with a gunshot wound to the chest.

The victim was reportedly alive and breathing, and American Medical Response arrived on scene before transporting him to the Billings Clinic.

No information is known on a possible suspect, and detectives with the Billings Police Department are investigating.

This is a developing story, please check back for updates.