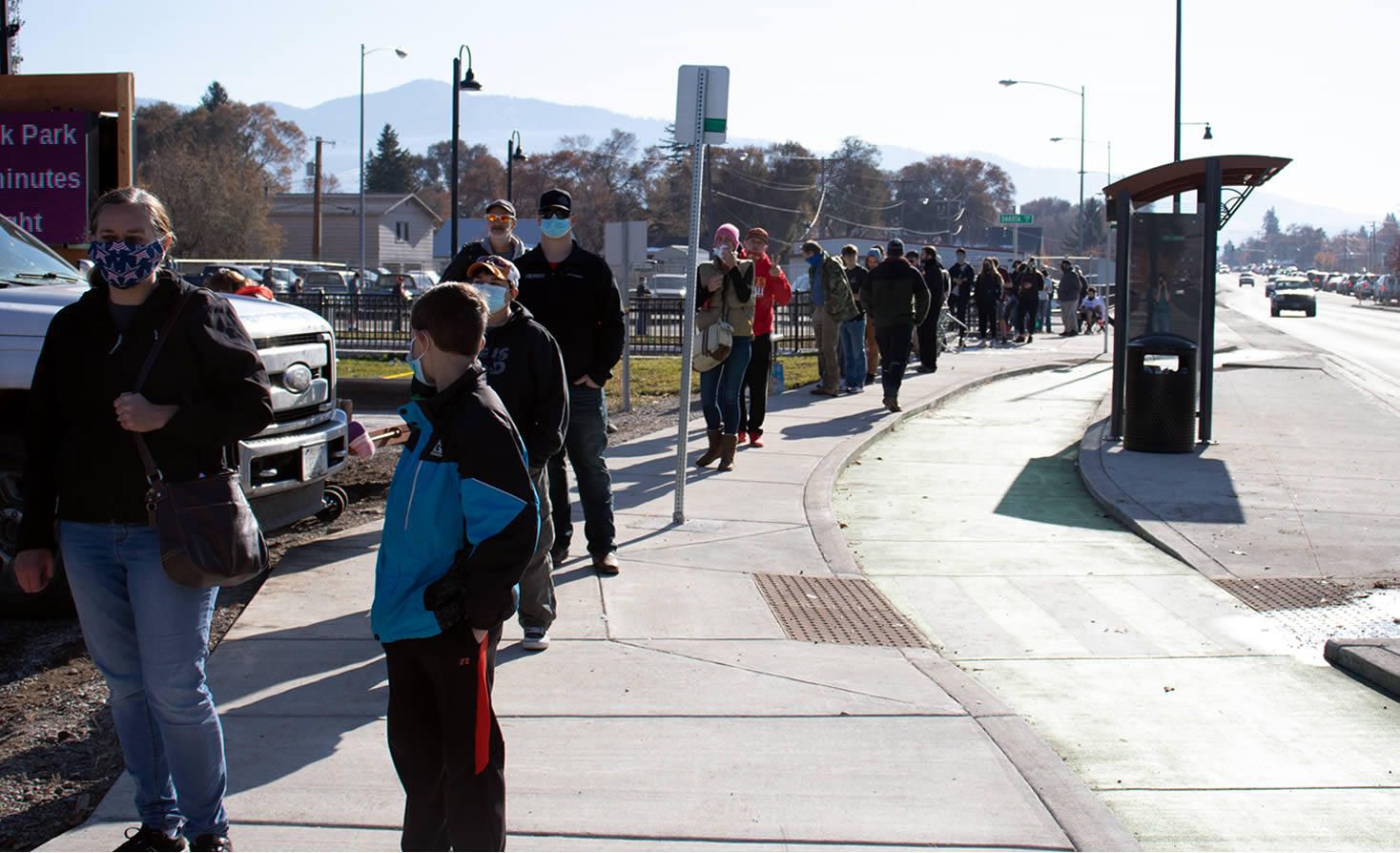 In Yellowstone County 83 percent of absentee ballots had been returned as of this morning. Voters in Billings reported waiting two to three hours to register to vote and cast their ballots this morning at MetraPark, the main polling station for the most populated city in the state.

As Yellowstone Public Radio’s Jess Sheldahl reports, a few hours after the polls opened at 7 a.m. the weather was perfect for waiting.

Jess Sheldahl: It’s a beautiful sunny day in Billings, Montana, not a cloud in the sky. It’s about 9 a.m. We’re at MetraPark, which is the main drop-off location for Yellowstone County, talk to voters.

Justin Ankeny: Justin Ankeny from here in Billings and work at Alpha House. Yeah, the COVID restrictions need to change. They’re not working obviously. Hopefully that all changes today. Honestly, I’d like to see, uh, all Republicans in, you know, get the liberal Democrats out because all they’ve been doing is lying and not helping at all.

Try to get a better hold on the whole COVID pandemic. That’d probably be a little better. There’s people in there who don’t want to wear a mask because they feel like they don’t need, to. Everybody else just hear the rules and just kind of go with it. Don’t bring your kids to this, because this is a long, long line.

Jess Sheldahl: How long did it take you to get in to vote?

Harris Stone: I didn’t even do it. I’m not gonna lie. I left. I’ll come back to the later on my lunch break and try it again.

Jess Sheldahl: It is now twisting around, this line is, and it’s not fully on the sidewalk anymore. Kind of twisting around into the back parking construction area here at Metro park.

Sabrina: My name is Sabrina. I live on the West End and I’m a crew member at McDonald’s. I’m actually fairly new to Montana. I’ve only been here for a year, but I would like to see the gun laws be a little bit tighter, more equality, less racism, better healthcare. I kind of hope Trump gets out. A lot I think he’s a very dangerous, scary man.

Jerry: My name is Jerry. I mean, I don’t want him to do any more against our guns or public lands. You know, I mean, I like to fish. The presidential one I’m watching, but, uh, rest of them I don’t know much about. I wouldn’t say excited, but I’m really hoping that a Biden doesn’t get in and Trump does. The Democrats kind of scare me.

I used to be a Democrat. I guess, Republican now. And, yeah, I’m for, you know, keeping our right to bear arms.

A volunteer from Forward Montana, an organization involved with voter advocacy, hands out snacks and water to voters waiting in line outside MetraPark in Billings on Election Day. November 3, 2020.
CREDIT JESS SHELDAHL / YELLOWSTONE PUBLIC RADIO

William Soloman: My name is William Shane Solomon, and I’m a registered nurse. I work at St. Vincent’s hospital. I’ve been practicing nursing for 30 years. You know, I think the big thing that we need to look at with the voters and the coronavirus, and I think that we need to go to an all mail-in ballot system. From this point forward, you know, for everybody nationally.

Jess Sheldahl: How long were you waiting?

William: It was two and a half hours to get through. I think I’ve really been a big part of following all the things with, you know, Biden and Trump. And I’m really hoping that in the future, we can get an independent party that can start moving forward to work for middle America instead of on the extreme ends of Republican and Democrat.

Jess Sheldahl: there were quite a few Libertarian candidates on the ballot, did any of them catch your interest?

Jess Sheldahl: Even though the line is long, spirits seem fairly high though. There are some people who are visibly frustrated in line. Most people seem calm and ready to cast their votes.

‘Off The Streets’ Shelter Opens November 13 in Billings