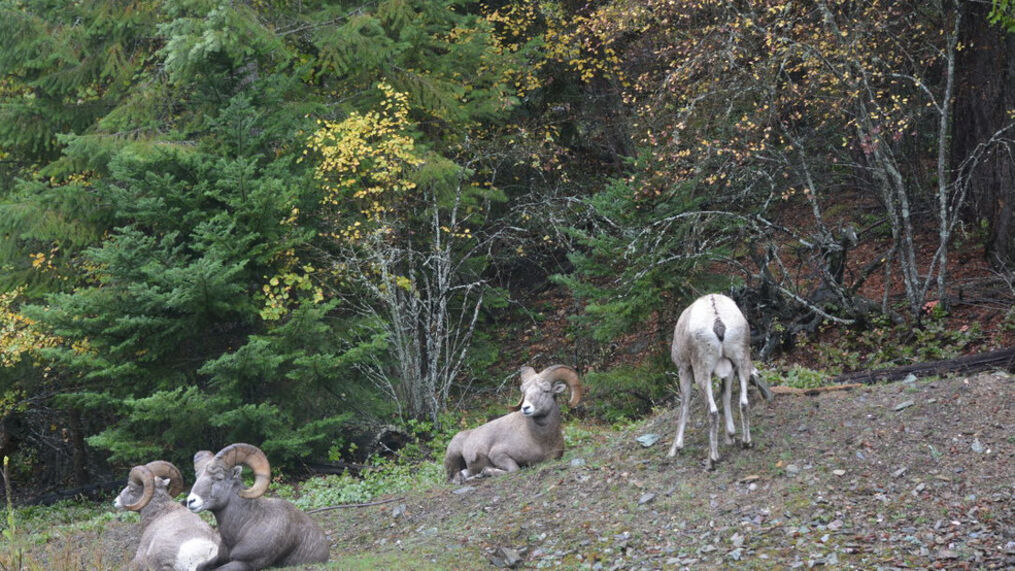 After scattering like wildfire in a gust of wind, 49 bighorn sheep have settled in to their new home in the Little Belt Mountains.

“One ewe went 24 miles north on the day of the release, turned around and came back,” said Jay Kolbe, wildlife biologist for the Montana Department of Fish, Wildlife & Parks in White Sulphur Springs.

Kolbe was able to see the large movement because the animals are wearing GPS collars that reveal their location twice a day for as long as five years. One of the five rams trapped and relocated traveled about 10 miles east to the Judith Gap area after release before traveling back to the Helena-Lewis and Clark National Forest.

“It’s not unusual to have them initially unsettled and to come back together again,” Kolbe said.

Conservation groups involved in the transfer were excited by the creation of a new herd.

“This is as big as it gets for us,” Brian Solan, executive director of the Montana Wild Sheep Foundation, told The Billings Gazette. “It’s the biggest step forward in nearly 20 years.

“The driver of it was FWP seeing an opportunity and engaging us and the Montana Wool Growers about a collaborative approach. And they got it done.”

The sheep were released on Dec. 17, a day after capture operations began on the south side of the Missouri River near Winifred in Hunting District 482. The sheep population there is 20% above FWP’s objective. Quicksilver Air Inc. was contracted to net and capture the animals from a helicopter. The helicopter crew then flew the captured sheep to FWP’s staff and volunteers waiting nearby. At the transition site the animals were given a physical, collared and prepared for a stock trailer ride to the Little Belts.

Kolbe said many of the ewes may be pregnant, because pregnancy rates for bighorns is high. Although the sheep have been exposed to pneumonia that has wiped out or severely limited other bighorn herds in Montana, Kolbe said these sheep have avoided contracting the illness.

From the Breaks it was about a three-hour drive to the South Fork Judith River where the sheep were released in habitat identified as bighorn friendly. One ewe died shortly after release due to an injury sustained when it hit a fence, Kolbe said.

“When we proposed the project to the (Fish and Wildlife) Commission, the Little Belts in general contain several large patches of high-quality habitat,” Kolbe said. “There are a couple of other areas in the Little Belts where sheep were historically, and we think they can be again.”

Bighorn sheep were wiped out in the Little Belts following the homesteading era. Prior to that, the animals had been plentiful in the mountain range that lies southeast of Great Falls and northwest of Harlowton.

During his stay along the South Fork of the Judith from 1880 to 1882, famed Montana artist Charlie Russell took note of the area’s bountiful wildlife. He was a teenager at the time, living with Jake Hoover, a hunter and prospector “shut off from the outside world.”

“These parks and the mountains behind them swarmed with deer, elk, mountain sheep and bear, besides beaver and other small fur-bearing animals,” he wrote in a 1917 article.

Evidence of bighorn sheep is also found in Native American art left on cliff faces along the Smith and Judith river drainages.

“We have actual prehistoric records of sheep presence in the form of petroglyphs right within a mile of where we released the sheep,” Kolbe said in a video.

In the past 10 years, a few bighorn sheep have migrated from the Missouri Breaks to the Little Belts on their own, but the herd has never prospered. FWP biologists have been unable to verify more than six sheep at one time in the entire range.

With the new bighorns transferred, Kolbe is hoping the herd may one day grow to 125 head, at which point FWP would be able to approve limited hunting. A similarly transferred herd near Bonner, in western Montana, took roughly 15 years to reach a population capable of supporting hunter harvest, Kolbe said. Bighorns moved into the Elkhorn Mountains expanded to a huntable population in 10 years.

The relocated bighorn sheep are a win for an FWP program that has suffered through challenging times. Under the state’s conservation plan — adopted in 2010 — FWP set a goal of creating five new huntable populations of bighorn sheep in the state by 2022. Yet the department’s attempts to transplant wild sheep in the Madison and Bridger mountains died on the vine.

Then in 2014 and 2016 disease outbreaks in herds near Gardiner and the National Bison Range reduced the herds.

The disease die-offs prompted concerns that domestic sheep may be transferring viruses to wild sheep. More recent research has discounted that theory as the sole cause, but winning over livestock producers prior to bighorn sheep relocations is still important to FWP.

In 2015 Gallatin Valley conservation groups sued the Beaverhead-Deerlodge National Forest over domestic sheep grazing in the Gravelly and Centennial mountains, in part citing concerns that the livestock would spread disease to wild bighorns.

In 2016 the Fish and Wildlife Commission approved the elimination of a struggling herd of bighorns in the Tendoy Mountains near Dillon after repeated transplants were unable to boost the population.

Combined, the problems made FWP reconsider its bighorn sheep program. One theory was the agency may be spreading pathogens when it moved animals. All of the issues delayed any new bighorn sheep projects as FWP sought the correct approach, said Solan, of the Montana Wild Sheep Foundation.

“We’ve been pushing pretty hard on the department on bighorn sheep,” he said.

“I can’t overemphasize how excited we are about this,” Solan added. “This is our group’s sole purpose.”

“This project would not have been possible without the collaboration, financial support and volunteerism of landowners, NGOs, private companies and local volunteers,” Kolbe said in a press release. “We appreciate all the partners who came together to help.”

The project’s total cost was close to $150,000, Kolbe estimated. The GPS collars alone cost $110,000, and were donated by the National Wild Sheep Foundation and its state chapter which kicked in $36,000 toward the collars.

“It’s just a real testament to all of the folks helping to get this done, putting their money where their ideals were,” Kolbe said.

FWP has identified other areas in the Little Belt Mountains that could be a new home for bighorns, but no plans currently exist to move any more sheep, Kolbe said. Before that can happen, funding and a source herd would have to be identified, nearby landowners would be contacted and a public environmental process undertaken.

For now, Kolbe is making plans to locate ewes in the spring to count lambs.

“That will tell us something about predation rate and habitat quality,” Kolbe said.

Man arrested in Helena on suspicion of truck theft