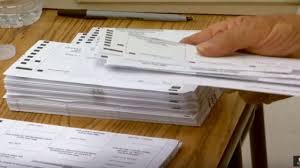 Yellowstone County is nearing a record voter turn out in next Tuesday’s primary.

As of Thursday afternoon, 40,739 ballots had been returned. That means, only a few thousand votes stand in the way of a new record. The county’s previous record was set during the 2016 primary, when 43,081 ballots were counted.

Elections Administrator Bret Rutherford told MTN News he believes the big response to Montana’s first all mail-in election is due to several factors, such as pre-paid postage and public awareness during the COVID-19 pandemic.

Getting the returned ballots counted early is the result of a new state law, SB 162, passed by the 2019 Legislature to help ease the time crunch on election officials and volunteers.

While the new law was designed to help election officials deal with a significant increase in the number of absentee ballots being used, Rutherford said it will help immensely during next week’s all mail-in election.

One frustration for Rutherford this year is the number of volunteers he’s had to turn away because of new social distancing guidelines.

“We simply don’t have the office space for everyone,” said Rutherford. “We’ve had to adjust.”

Rutherford reminds voters that mailing in your ballot at this late date is a bit iffy. He suggests dropping off your ballot at the local elections office is the best way to ensure your vote will be counted.