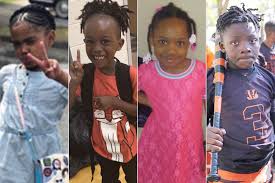 Across the United States, at least six children between the ages of 6 to 14 were shot and killed during the Fourth of July weekend.

Communities in California, Washington D.C., Alabama, Illinois, and Georgia are reeling as they mourn the passing of Secoriea Turner, Royta De’Marco Giles, Davon McNeal, Natalia Wallace, a 14-year-old in Chicago, and a 6-year-old in San Francisco, who died by gun violence.

Atlanta police say Secoriea Turner was in a car whose driver tried to get through an illegal barricade placed near Wendy’s restaurant where Rayshard Brooks was shot and killed back in June when at least two people who opened fire on the car she was riding in.

A $10,000 reward has been offered in any information in her case.

Mayor Keisha Lance Bottoms said in a press conference that “enough is enough.”

Authorities say a man has been arrested on a murder charge in connection with a recent shooting at an Alabama shopping mall that left 8-year-old Royta Giles, Jr., dead and three other people injured.

CBS42 reported in a tweet that the shooting happened at the Riverchase Galleria.

Police in the Birmingham area suburb of Hoover said 22-year-old Montez Coleman has been arrested in connection with Friday’s shooting at the Riverchase Galleria, the state’s largest mall.

“Our community is heartbroken,” Hoover Police Chief Nicholas Derzis said at a press conference. “The officers at the scene will forever bear the image of an innocent child dying in their arms. A child died because people chose to settle a verbal argument by firing guns at each other in a crowded mall. Although we have made an arrest in this case, we are not going to be satisfied until all those responsible for this tragedy are held accountable in a court of law.”

Police said Coleman is also charged in the wounding of a man, woman, and girl — all innocent bystanders.

Authorities say investigators are seeking to identify others involved in the shooting.

A grandfather says his 11-year-old grandson was grabbing a phone charger on the way to a cookout in Washington when he was struck and killed by a stray bullet.

John Ayala told WUSA-TV that his 11-year-old grandson Davon McNeal was getting out of a car Saturday night to go get the charger when shots rang out.

Washington D.C. Police Chief Peter Newsham told reporters that night that about five adult men shot up the area, striking an 11-year-old boy who later died at a hospital.

“There are no suspects,” said Metropolitan Police Chief Peter Newsham via Periscope on the police department’s Twitter page. “We have a lot of detectives out at the crime scene working and trying to get information.”

D.C. police are asking for the public’s help in finding a black car they say fled the alley.

Mayor Muriel Bowser said in a tweet that a $25,000 reward is being offered to anyone who can help solve the case.

Chicago police say a 7-year-old girl at a family party and a 14-year-old boy were among 13 people shot and killed in the city over the Fourth of July weekend.

Police spokesman Tom Ahern says four males opened fire on a large gathering in the street in Englewood just before midnight Saturday, killing the teenage boy and three other males.

Police say Natalia Wallace was fatally shot in the head while standing on the sidewalk at her grandmother’s house in the Austin neighborhood during a Fourth of July party around 7 p.m.

According to CBS Chicago, a person of interest is being held for questioning in connection to the shooting that killed Wallace.

“We will leverage every resource at our disposal to not just catch these killers, but to also prevent it from happening again,” Police Chief David Brown said in a video posted to the department’s Twitter page. “I just hope that the tragedies here these past few weekends will bring us all to the table so that we can revamp the electronic monitoring program, find a way to hold violent defenders in jail longer. Chicago deserves us figuring this out. And we can.”

At least 59 people were shot and wounded over the weekend.

Police say a 6-year-old boy was killed in a San Francisco shooting that left another person wounded.

Officers responding to reports of gunfire found the child suffering from a gunshot wound late Saturday in the Bayview neighborhood.

Bayview Captain Troy Dangerfield said in a tweet that the child was watching fireworks when he was shot.

The young victim was rushed to a hospital, where he died.

A second male victim, whose age was not released, was hospitalized with a gunshot wound described as non-life-threatening.

There have been no arrests and there is no suspect description.