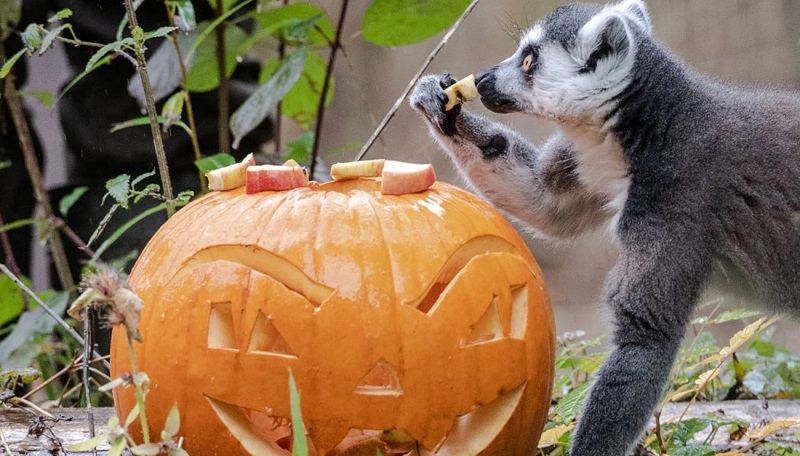 Billings, Montana – What happens to all those pumpkins sold at the grocery store now that Halloween has passed?

It turns out that lots of them are given to the ZooMontana animals.

“They enjoy interacting with different things, just like any other animal does,” said Jeff Ewelt, the executive director of ZooMontana on Thursday.

This time of year brings in a ton of toys and food for the animals at the zoo because even raptors like to play occasionally.

“We get hundreds if not thousands of pumpkins every year,” Ewelt said.

Every year, pumpkins that aren’t sold at supermarkets like Albertsons and Walmart are given to the zoo.

“The biggest reason is for enrichment, which basically means they’re toys for animals,” said Ewelt.

The animals are kept intellectually active using the pumpkins. They serve as toys for the eagles.

“They’re going to grab it with their talons, kind of move it around, and kind of play with it a bit,” Ewelt said.

The bears also do, even if that toy also serves as a snack.

“We’ll actually fill that pumpkin with nuts and honey, things of that matter, so the bears can smell it and that entices them to basically destroy the pumpkin to get to that good stuff,” said Ewelt.

The Billings Food Bank also offers what you need if you’re looking for gourds for your own animals. There were eleven tons of pumpkins donated this year.

“This year we’re going to give them to anybody that’s got animals, or wild animals that they’re feeding,” said Sheryle Shandy, the executive director of the Billings Food Bank.

This Thursday, a single woman scooped up a whole pallet.

While the Billings Food Bank is still taking pumpkin donations, ZooMontana has stopped.

The Rimrock Foundation alerts the public to the Fentanyl presence