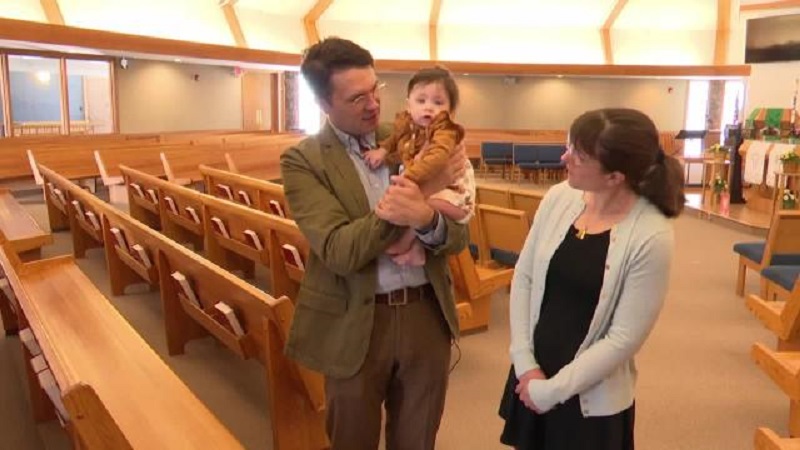 Billings, Montana — The Lutheran Church of the Good Shepherd hosted a large gathering of adoptive families on Saturday to honor both recent adoptions and the newest member of one Billings family. November is National Adoption Month.

The day of Saturday will always be cherished by Ryan Young and Julie Beicken. It was the climax of a journey that began in 2019 and was almost eight months in the making when they first met their baby daughter.

“One amazing day we got a call saying that in 24 hours, a baby is going to be born in Whitefish. They said that she was pretty much perfect, and she definitely is,” said Ryan Young, adoptive father.

Ryan and his wife Julie waited for National Adoption month to officially adopt their new daughter Victoria, because for them the moment is “about more than just their newest member of the family.”

“I think it’s great to be able to celebrate and it’s not just about any one individual baby or family. It’s a whole community of people that are supporting this process for the babies and their futures,” said Julie Beicken, adoptive mother.

Families who have adopted or fostered children are honored during national adoption month. Additionally, it serves to increase awareness of the more than 140,000 kids who are available for adoption. By fostering and adopting children, Phillip and Sara Reintsma have been contributing their fair share to the cause. Today, they were recognized for their efforts.

“Originally when we went into foster care it was not for adoption. It was for it to be a safe place for kids who needed their families to be healed and have their parents make some different choices. When we realized that that wasn’t going to happen for our (adopted daughter) Marley, then we had to discuss whether adoption was something we were interested in. And we knew we were supposed to be Marley’s forever family,” said Sara Reintsma, adoptive mother.

The Reintsmas’ first adoption outside foster care was Marley, and it was a turning point in a journey that would quadruple their family.

“It’s been an amazing thing just to watch our family grow. It was Sara’s idea and from the get-go and I was 100% in. It can be challenging at times but it’s rewarding at the same time. Seeing the changes and watching them grow and be a part of our family and becoming one family,” said Phillip Reintsma, adoptive father.

The Reintsma’s have three biological children and have fostered six, four of which have become members of the family. They mentioned that it “can come with its challenges.”

“There are definitely days that are hard, but parenting is hard regardless of whether it’s biological, foster, or adoptive. And there are challenging days but there are amazing days as well,” added Sara.

They claim they wouldn’t have it any other way because it gives them the chance to change a child’s life and give them a stable, loving home.

“I would encourage anyone that’s out there, that’s thinking of fostering or adopting, to do it. It’s rewarding and you won’t regret it,” Phillip added.

Billings family hoping to get lost property back from June flooding