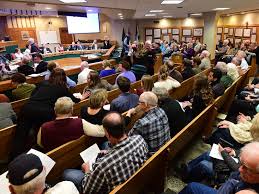 Billings City Council won’t be considering a Welcoming Diversity Ordinance LBGTQ community members have pushed for. A 7 to 4 vote on Feb. 24 means the ordinance will not be on the agenda in August.

The ordinance would have extended legal protections to LBGTQ people and other minorities.

Supporters shared stories about discrimination they’ve face personally or against their family member and said a ordinance would benifit Billings financially and culturally.

“I’m a student at Sky View High School and I’m here today to show my support for the Welcoming Diversity Ordinance and the positive effects it will have on the Billings Community,” said a student. YPR is withholding her name because she’s a minor.

“LGBTQ discrimination exists all over the United States and Montana is no execption,” said Robyn Driscoll.

“The WDO is too important for Billings to not continue the discussion,” said Jacqueline Owen.

Opponents said they feared an ordinance would be used against those who do not support LBGTQ people due to their religious beliefs. They also said they believe LBGTQ people already have legal protections.

“There’s a lot of pain that’s being talked about up here and I’m sorry that that happens in our community. But there’s another side to this where people of faith are being persecuted,” said Steve Scheiner.

“This ordinance would be a disaster for business owners,” said Bernadette Brown.

“To compromise the very religious beliefs that inspire their lives,” said Terry Forke.

Before the vote, Mayor Bill Cole expressed his oppostition to the ordinance, saying it wouldn’t fix the problem of discrimination and the council needed to focus on the upcoming public safety mill levy.

Councilwoman Penny Ronning, who introduced the draft, said she disagreed with her fellow councilmembers reasoning for not adding the ordinance to the August agenda.

“To state that someone can’t support language in a draft is shocking to me. A draft means it can be changed. That’s how democracy works,” Ronning said.

“Tonight people did not separate church and state like they should. They voted based on their religious beliefs and based on whether they think it’s okay to be an LGBTQ person, versus whether as city council members they need to protect every one of their constituents equally,” Kiely Lammers, who helped organize support for the ordinance with the advocacy group 406 Pride, said after the vote.

Monday’s 7 to 4 vote against discussing an ordinance implies Billings is further away from passing an NDO than it was in 2014, when council members voted against adopting a similar ordinance by a vote of 6 to 5.

The content of the Welcoming Diversity Ordinance also resembles the nondiscrimination ordinance City Council canceled plans to introduce in October.

“I’m gonna start forwarding them the emails that we get from people who are interested in our community but wanna know if we have an NDO.”

The Montana consitution protects people from discrimination based on race, sex, social background and politicial or religious ideas. A bill to change the constitution to include LGTBQ people failed last legislative session .

Man given 50 years in prison for decapitating man in Billings