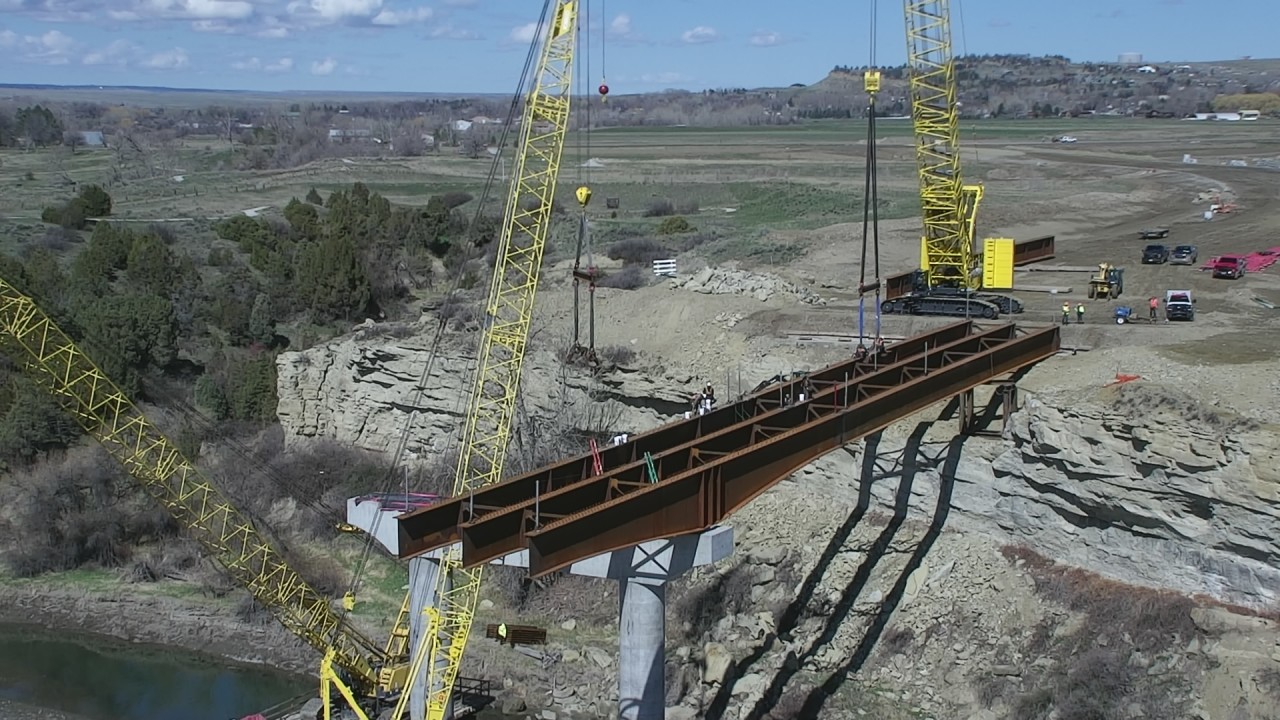 BILLINGS – Construction is well underway on the Yellowstone River Bridge segment of the Billings Bypass project, a multi-phase construction project that will eventually be a big time-saver and eliminate travel headaches between the Billings Heights to Lockwood.

Construction crews are now in the process of putting the bridge girders, the horizontal beams that will support the new roadway, into place on top of the concrete bridge piers that were constructed earlier this winter.

“They have been going at it nonstop. They have two crews they come in and alternate crews to maintain a steady workflow,” says James Stevenson, engineering project manager for the Montana Department of Transportation.

Building the 1,858-foot-long span – roughly about a third of a mile – across the Yellowstone River is certainly no easy task. The girders being placed to support the roadway weigh upwards of 57,000 pounds each. A temporary bridge has been built for cranes and other machinery.

“There’s no through access at this point, so any of the work or coordination has to be trucked around,” says Stevenson.

The $30 million bridge is expected to be completed in 2022 but won’t be open to the public until approximately 2024.

“When this is done, it will be four lanes from the roundabout transition into two lanes and then there will be a 10-foot walking path on the west side of the bridge that will be separated by curb and guardrail,” says Stevenson.

Hikers and bikers will be able to take the trails of Dover Park onto the bridge and cross over to Lockwood, but the main advantage when the Billings Bypass is finally completed will be for motorists.

“It will connect Lockwood at the Johnson Lane interchange on the south side of the river with the Heights, and there will be two connections to the Heights One on old Highway 312 and a second that connects to main street and old highway 87,” says Lisa Olmsted, the public involvement manager for DOWL, the lead engineering firm on the project.

A new road will also be built north of Mary Street in the Heights as part of the project. All six segments aren’t expected to be completed until approximately 2026.

“Even though it’s named Billings bypass project, it’s not a true bypass. It’s an urban arterial. It’s more like Rimrock Road or Shiloh Road as far as speed and function and how it will really feel,” says Olmsted.

While the $100.1 million Billings Bypass project is led by the Montana Department of Transportation, Olmsted said there are also many engineering firms and contractors involved which will have a huge economic impact on the area.