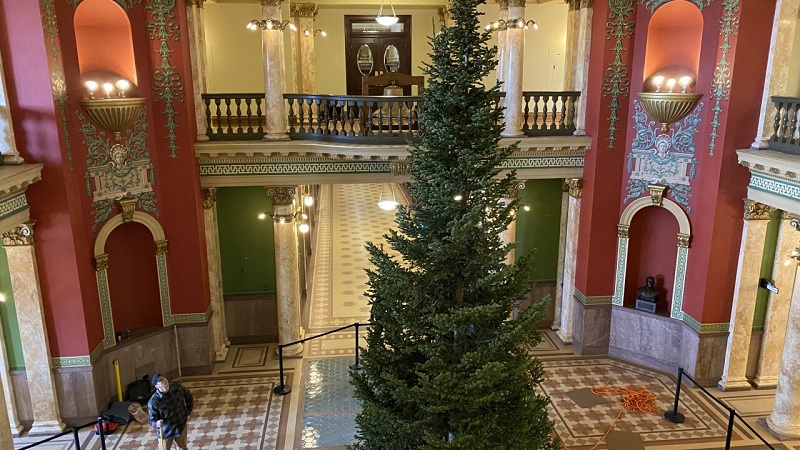 Helena, Montana – In Powell County, just south of Gold Creek, workers are harvesting commercially on 1,100 acres of land as part of the Rancho Deluxe Vegetation Project. But one of the trees they removed is particularly noteworthy since it has been replaced as the Christmas tree in the rotunda of the Montana State Capitol.

Gov. Greg Gianforte went to the project on Monday to witness the tree in its natural setting. A tree was chosen to suggest for the position by Sean Steinebach, an outreach forester with Sun Mountain Lumber in Deer Lodge. He claims to have examined hundreds of trees before becoming interested in a 57-foot fir.

“I think that as far as the form, it just screams Christmas tree – and it’s a subalpine fir, and nothing’s more Christmassy-smelling than a subalpine fir,” he said. “I was kind of excited when I saw it because they really make a wonderful Christmas tree, and we don’t have a lot at this elevation, but there’s one right there.”

“This is a beautiful specimen,” Gianforte said. “The top is so full; it’s going to look absolutely gorgeous in the rotunda at the Capitol.”

The tree needed to be taken down at that point. The Pintler District Ranger of the Beaverhead-Deerlodge National Forest even supplied a special Christmas tree permit for the task. His name is Cameron Rasor. Harvesting the tree and loading it onto a trailer for the drive to Helena took around 30 minutes.

The Rancho Deluxe project, according to U.S. Forest Service officials, is generating lumber, reducing fuel loads to reduce wildfire danger, and repairing damage from recent beetle infestations in the region.

The collaborations that made the task possible were also acknowledged by taking a tree from the project area. The Montana Department of Natural Resources and Conservation assisted in project design and execution under the Good Neighbor Authority, a federal program that allows the Forest Service to collaborate with state agencies. The GNA has been emphasized by Gianforte as a strategy to increase active forest management in the state.

Additionally acknowledged for their contributions were Sun Mountain Lumber and Parke Logging.

“It takes everybody to make this thing happen – a super collaborative effort,” said Steinebach.

“We are the Treasure State, and timber is one of our treasures – it’s a renewable treasure, and that’s why we have a great partnership,” Gianforte said. “To bring some of Montana’s treasure into the Capitol is just a wonderful thing.”

The tree arrived at the Capitol on Friday morning after being extensively pruned to fit. It was transported through the front doors and into the rotunda by workers using a crane that was brought in to lift it to the second floor. With a lighting ceremony scheduled for the upcoming days, it will now be fully decked.