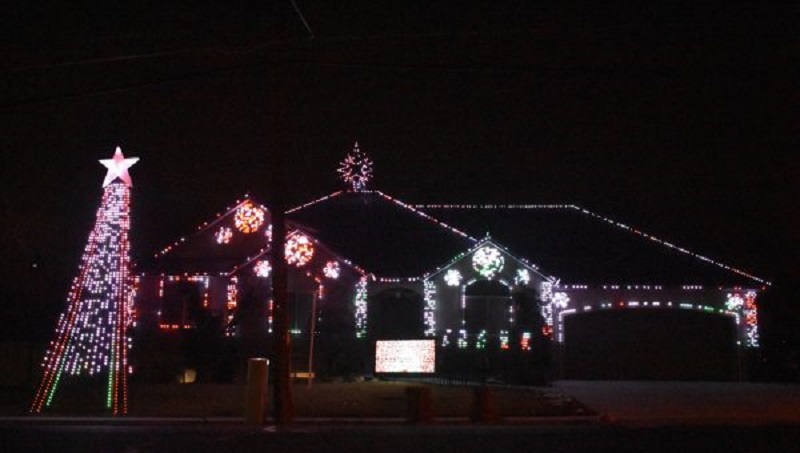 Billings, Montana – You’ll undoubtedly start noticing more Christmas lights around town now that Thanksgiving is over. Although Billings has many impressive displays, the coordinated light show at Fuller Family Medicine on the west side of the city may be the best.

Anyone who passes Fuller Family Medicine at this time of year will experience a wonderful sight and sound, but for Brad Fuller, it’s about more than simply holiday decorations.

“Oh man it’s been what 30 years now or more that we’ve been doing it, between my dad and I,” Fuller said.

Brad was in eighth grade when everything started. Brad and his brother assisted their father, Dean Fuller, in decorating their home in Billings. Brad actually kept returning and offering assistance throughout college and even during medical school.

Brad was eventually given the opportunity to continue the custom.

“He kind of winded down, and I started doing it at my house,” Fuller said. “Then when I built this building, I was like ‘Ah ha!’ I have a perfect location to keep doing the lights.”

The show is much better now, 12 years later. Over the years, Fuller has hung practically every single light, but not without a little assistance.

“For the last 3 years my wife Angela has helped me out,” Fuller said. “Hallelujah, because it gets so cold and fine detailed that you need somebody to help you.”

Over a thousand lights to hang is a laborious task, but Angela claimed they genuinely look forward to it.

“We really have a great time,” Angela Fuller said. “We joke that we have roof dates. It’s become really a family affair.”

Each fall, the couple and their five kids go through the process together. They start stringing lights in October to avoid some of the winter. Nevertheless, the Saturday following Thanksgiving is the first day the lights are ever turned on.

It’s a custom that has truly completed the circle for Brad.

“Our five-year-old Winston, he was working on this big ribbon tree,” Angela said. “And he said ‘Daddy, how old were you when you started doing Christmas lights?’ And it was kind of a full circle moment for him like ‘you know I was about your age.’”

Many families in the Billings area look forward to the show and keep coming every year, not realizing how much labor goes into producing it.

“I always say that he’s a Christmas lights rocket scientist, and he truly is,” Angela said. “Every beat of every second, every part of every song is so intricately choreographed. My brain is not like that. His brain is amazing.”

A never-ending light show, according to Brad, is a tradition he wants his dad and family to be able to be proud of.

“I remember growing up, helping my dad at his house and we would get cards saying wow this really meant a lot,” Brad said. “And so, it’s kind of that positive feedback that keeps you going.”

The Montana Lottery announced the winner of the $100,000 “early bird” prize