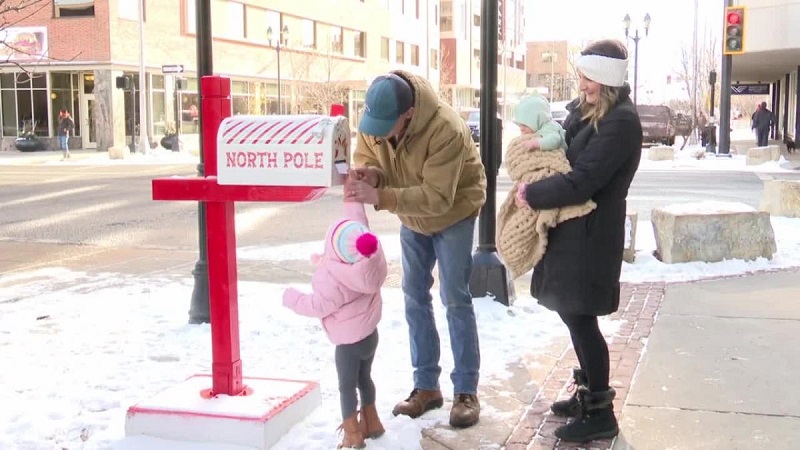 Billings, Montana – Downtown Billings witnessed the appearance of a magic mailbox along with holiday decorations.

The mailbox at 100 N. Broadway, in front of Big Dipper Ice Cream, delivers letters to the North Pole.

One parent Jonnell Kurschner stated on Friday that her family was really eager to use the mailbox.

“My daughter Everleigh is three this year, so she’s really into Santa Clause and the Christmas spirit,” Kurschner explained. “She knows that he’s bringing her lots of good toys, so we had to go send a letter to Santa this year.”

Everleigh waved goodbye to her letter after it had successfully entered the slot while grinning.

The D’Ambrosia family joined the Kurschner family. According to Micayla D’Ambrosia, her family was overjoyed to schedule a day to mail a letter to Santa.

“We just thought it would be a fun thing to do with friends, to come down here and we’re going to get some ice cream after,” D’Ambrosia said. The D’Ambrosias’ oldest child, Becklea, was ecstatic to send her letter to the big man in red.

Real estate agent Alicia Donovan of Montana Real Estate Brokers said on Tuesday that her business has unique connections to the North Pole.

“We’re excited. We have a couple of connections up at the North Pole, and we just wanted to share those with people,” Donovan said. “We had about 125 kids whose names were submitted for us to kind of lean into that, and they’re getting their letters this week. It’s really neat.”

Using the company’s unique connections, Donovan stated, they could help get letters from the North Pole to the kids in Montana.

“The letters that we’re getting are coming right from the North Pole. So it is hand-stamped, postmarked from the North Pole, their names are on it, their addresses are on it. It’s legit,” Donovan said. “I just heard from one of the first family members who put in a request, said his nephew got it last night, and he was ecstatic.”

While the business isn’t taking any more requests during the Christmas season, interested parents should keep an eye out for the following year’s application period.

“The spirit of Christmas comes from the joy that comes, and the twinkle that comes from a child’s eye,” Donovan said. “To be able to do something so minuscule, the sharing of this connection, and be able to share that in the community, we all need as much of that as we can get.”

Santa has lots of helpers in Billings, whether you’re writing him a letter or receiving one.

Tips for preparing your pipes for the winter

On Friday night, a gas station in Billings robbed with a gun