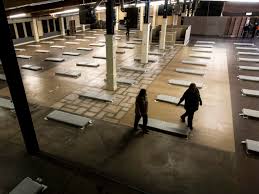 MISSOULA, Mont. — An emergency winter homeless shelter in Missoula that’s also hosting coronavirus vaccine clinics will remain open through the end of April after receiving a grant from a human services organization.

The shelter in a refurbished warehouse had been scheduled to close at the end of March. Advocates said that could have left people exposed to dangerously cold conditions with the winter not over, the Missoulian reported.

An average of 120 people per night have been using the Johnson Street shelter, said Jesse Jaeger, the director of advocacy and development at the the nonprofit group operating the shelter.

The first vaccination clinic was held at the shelter this week, with about 30 people getting their shots, and another clinic is scheduled soon.

When the shelter closes at the end of April there won’t be a lot of options for people experiencing homelessness in Missoula, Jaeger said. A second shelter in the city is still maintaining social distancing and so has only 88 beds. It’s almost always full.

“There are likely to be more encampments that spring up, and people are going to see more homeless people in the community because they’re not going to have a 24-hour space in that building anymore,” Jaeger said.

The economic effects of the pandemic mean more people are at risk of losing their housing, Jaeger said. A recent report from the National Low Income Housing Coalition estimated that between 11,000 and 31,000 households in Montana are at-risk for eviction due to economic circumstances.

Missoula council member Sandra Vasecka said neighbors around the Johnson Street shelter have concerns about property crimes, drug and alcohol use and other problems.

“I did promise my constituents that this would end at the end of March. They did see March as the light at the end of the tunnel,” she said.