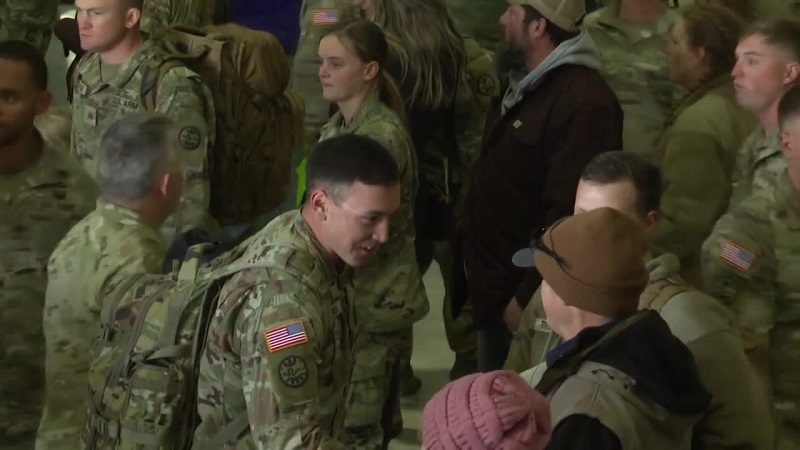 Missoula, Montana – Over 300 members of the Montana National Guard who left their homes and families to serve in Southwest Asia a year ago returned home on Thursday.

Around nine in the morning, families of soldiers from Task Force Grizz and the 163rd Combined Arms Battalion gathered at the Missoula airport to welcome their loved ones home.

To show their solidarity, they carried homemade signs and waved the American flag. While waiting to watch the jet land at the terminal, they were experiencing all the possible feelings.

“I feel like I’m gonna throw up but I also am so excited,” Alyssa Sears who was waiting for her husband, said.

“I’m ready for him to do some dishes,” Kellen Gibson said of his deployed brother. “We’ve missed him so much,” Gibson’s mother added.

Colonel Renee Dorvall reported experiencing a similar sense of anticipation as she awaited the arrival of her troops and expressed her pride at the sacrifices made by both her soldiers and the families they left behind.

“You know, I am just so proud, I am proud of the service you know, we are a volunteer army. So these soldiers raised their right hand to defend their great state and nation. They answered the call when our unit was tasked to mobilize, so very proud of all their professionalism, their training, and all they were able to accomplish,” Col. Dorvall said.

“But also very proud of the families that are here to support them, you know, they have a lot of sacrifices not having their service member with them for the last year. Knowing they missed so many significant events in their family’s life, so just very thankful for their service as well,” Col. Dorvall continued.

Everyone cheered as the soldiers came out of the aircraft, and the reunion of families was accompanied by tears and joy.

According to Col. Dovall, this was a gift for the families this Veteran’s Day, “With Veteran’s Day being tomorrow, what a great time for them to come home.”