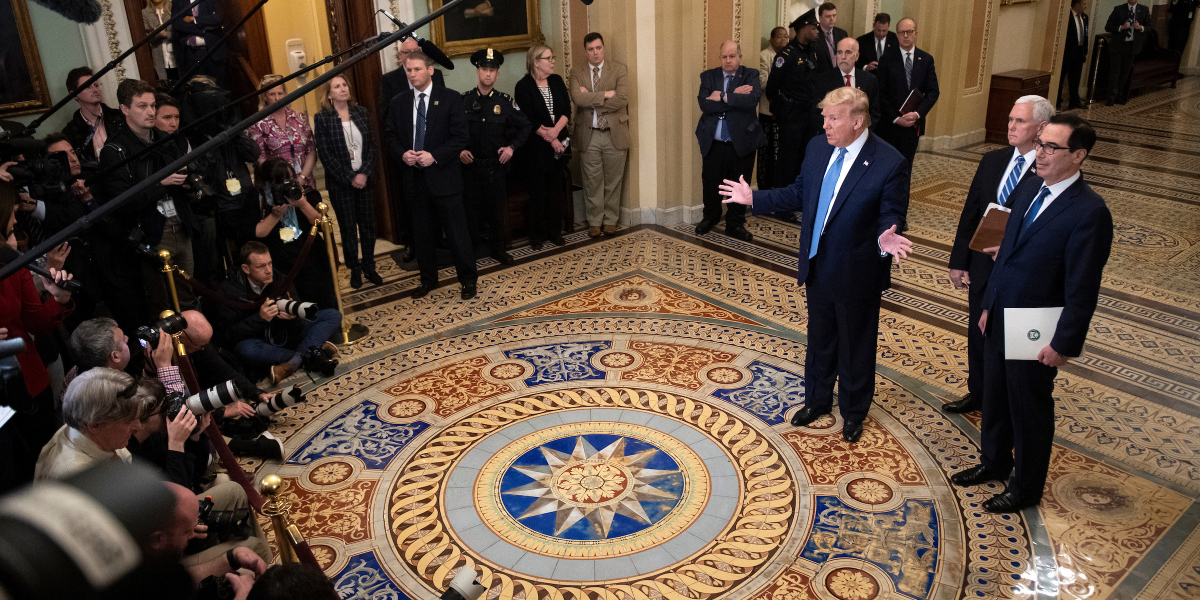 President Donald Trump vetoed a $740 billion defense bill on Wednesday after sharply criticizing another massive spending bill that includes $900 billion in COVID-19 relief, putting him at odds with Montana lawmakers who helped pass both pieces of legislation with veto-proof bipartisan majorities.

“This political stunt undermines our national security, defense installations in Montana and across the globe, and it delays the delivery of critical care and benefits for our service members and veterans – particularly those suffering and dying from conditions associated with their exposure to Agent Orange,” Tester said in a statement.

“Democrats and Republicans came together to overwhelmingly pass this critical legislation earlier this year – just as Congress has done for more than 50 years,” Tester said. “Now we must move quickly in a bipartisan manner to override this veto, provide for our national defense and deliver for our troops, veterans and their families.”

Trump called the NDAA “a gift to China and Russia,” without citing specific details, and said it should include changes to Section 230 of the Communications Decency Act. That’s a law that protects web companies, including internet providers and social media companies, from facing liability for content posted by their users. Trump and other Republicans allege companies like Facebook and Twitter have inappropriately censored conservative views.

“Sen. Daines believes it’s critical to address Section 230 as Big Tech is silencing conservative voices,” Daines spokeswoman Katie Schoettler said in a text message. “With that said, he also believes this bipartisan national defense bill is critical for our national security, countering adversaries like Russia and China, supporting our troops and veterans, and strengthening Montana’s defense priorities like Malmstrom [Air Force Base] and Montana’s Guard units.”

Republican Rep. Greg Gianforte, who will soon leave Congress to serve as governor of Montana, also voted for the NDAA. Asked whether he would vote to override Trump’s veto, Gianforte’s office said in a statement, “Greg consistently voted for the bipartisan NDAA to support our troops and will vote for it again.”

Trump also cast doubt on the future of the $2.3 trillion spending bill that Congress passed on Monday. The bill includes about $1.4 trillion to fund the government through September, as well as a $900 billion COVID-19 relief package that would provide direct payments of $600 to every American making less than $75,000 a year and their dependents.

In a video posted to Twitter late Tuesday, Trump called the legislation “a disgrace” and demanded that Congress increase those payments to $2,000. He conflated the COVID-19 package with other parts of the bill, saying it “has almost nothing to do with COVID” before listing a variety of other domestic and international programs the legislation would support.

The $900 billion COVID-19 package is smaller than the $2.2 trillion CARES Act but remains one of the largest stimulus measures Congress has ever passed.

Despite any shortcomings, Daines and Tester said the bill should become law as soon as possible to provide relief to Americans struggling due to COVID-19.

Schoettler said Daines supports the idea of providing larger stimulus checks and sponsored a bill that would have accomplished that, before congressional leaders negotiated the payments down to $600.

“While the senator supports an increase in the direct checks, he also strongly believes it’s critical to get relief to small businesses, workers and families as soon as possible, and signing the bill will help do that,” Schoettler said in an email.

In an interview Monday, as the spending bill was headed toward a vote in the House, Tester told the Daily Inter Lake he would have preferred to provide more targeted relief to those most affected by the pandemic, “to get the biggest bang for the buck.”

“If I were going to design this, I would focus more on unemployed folks and distressed businesses,” Tester said. “But nonetheless, there’s no doubt that 600 bucks is going to help a lot of families, and it’s going to keep the wolf away from the door. It’s also going to go to some families that probably don’t need the help, quite frankly.”

Tester also said he wished the bill included assistance for cities, counties and other local governments that might struggle to balance their budgets due to shortfalls in property tax revenue. Democratic leaders agreed to drop that demand in negotiations, while Republicans agreed to forgo liability protections for businesses dealing with COVID-19.

Tester still supported the bill, acknowledging the give and take of the partisan negotiations.

“This critical economic stimulus package isn’t perfect, but it’s a bipartisan compromise supported by 92 senators,” Tester spokesman Roy Loewenstein said in an email. “Every day the president delays signing it into law is another day Montana workers and small businesses are forced to wait for badly needed relief that will help reopen our economy and get folks back to work.”

Asked about Trump’s criticism of the spending bill, Gianforte’s office offered a statement that read in full: “Hard-working Montanans are overdue for relief.”

Congress may now vote to override Trump’s veto of the NDAA. The spending bill that includes the COVID-19 package may become law if Trump doesn’t sign it within 10 days. Lawmakers likely would have enough votes to override a veto of that bill, too. Or they might revisit the legislation to increase the direct payments.