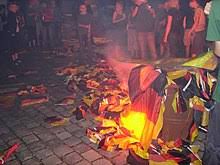 Gallatin County Sheriff Brian Gootkin said Herrera knew the family and the incident was not a random act.

Police said Herrara entered the family’s property around 11 p.m. on Aug. 10th in Three Forks and took the Trump flags being displayed on the porch.

Gootkin said Herra walked roughly 30 feet from the property before igniting the flags with a lighter.

The family reported the burning to the sheriff’s office and identified Herrera.