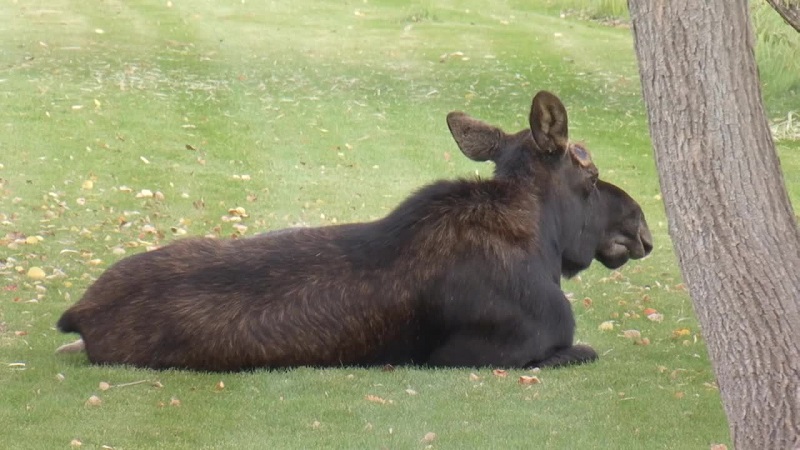 Billings, Montana – The moose in Billings has been on the loose for more than a month, and people are worried about how it moves.

Tess and Tim Lehman live in Billings, and they are used to seeing the famous moose walk along the irrigation ditch behind their backyard near Poly Drive and Parkhill Avenue.

“The poor thing, you know, you look out your window and there’s this moose crawling,” said Tim on Monday.

But this weekend, they saw that the animal was acting in a strange way, so they took a video as proof.

“I saw him trying to walk past this fence and he couldn’t get up. He was like on his hands and knees basically,” Tess said.

The two people think the moose is hurt.

“One of his front legs are sprained and broken or something. He can’t put much weight on it,” Tim said.

Dave Pauli is the Human Society of the United States’ program manager. MTN News sent him a video of the moose taken by the Lehmans. Pauli said it’s not unusual for animals like moose to search for food on their knees.

Pauli is worried about what the animal does when he stands up.

He said that, compared to earlier sightings, the moose’s movements seem more labored or “stoved up.”

Fish, Wildlife, and Parks in Montana agreed. When MTN News sent FWP Tess’s video, they sent a team right away to check on the moose on Monday.

“As long as they’re still mobile. They’re incredible with what they can live and with what things they can overcome,” said Robbie Seykora, FWP’s acting regional communication manager.

Over the next few days, FWP will keep track of where the moose is and remind residents not to feed it.

“It won’t leave because, of course, it has a food source and it’s comfortable in town,” Seykora said.

Some people are now wondering if the animal will be able to leave town on its own, which has been the hope of FWP from the beginning. “Pretty soon he’s going to end up dead back here,” said Tim.

As the flu season begins, Billings seeing a scarcity of medicine