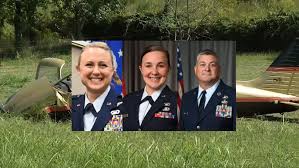 The three national guardsmen died in a plane crash Tuesday afternoon in McMinnville. They were members of the Tennessee Air National Guard’s 118th Wing.

On Wednesday Col. Todd Wiles, commander of the 118th Wing, said in a press release, “Words can not begin to explain the shock, grief, pain and dismay we feel having lost three remarkable members of our Guard family. All three were dedicated to the service of our nation. Their families are in our hearts and our prayers.”

Col. Wiles says all three participated in missions that saved lives in Tennessee. Their squadron took aerial photos during the Gatlinburg Wildfires and the March 2020 Middle Tennessee tornadoes to help with rescues and intelligence long before boots could be on the ground.

Two of the 118th Wing fatalities had spouses who also serve in the unit. Wiles says his heart aches for their immediate family members.

“That door will never open for those children to their Mom, Dad, see their husbands and wives come home,” Wiles said. “It’s truly as painful as a combat loss even though it was an off duty tragedy the hurt to the families is the same.”

The single-engine Piper PA-28 civilian airplane went down near Warren County Memorial Airport in McMinnville, according to the Federal Aviation Administration.

Witness told investigators with the NTSB that the aircraft took off from airport but was seen trying to maneuver back to the airport before crashing.

Tennessee Governor Bill Lee also reacted to the crash saying, “We are incredibly saddened by the sudden and tragic loss of three Airmen in yesterday’s accident. I ask Tennesseans to join Maria and me in praying for Lt. Col. Shelli Huether, Capt. Jessica Wright, Senior Master Sgt. Scott Bumpus, and their loved ones during this difficult time.”

Biden is your best bet for a stronger U.S. economy