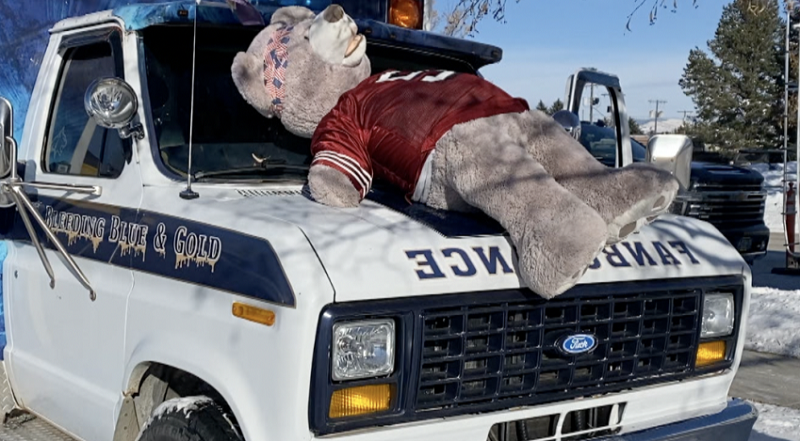 Bozeman, Montana – Football fans in Bozeman were thrilled to see the College Gameday bus arrive in town, but there’s another vehicle passing through Bozeman that can compete with it. Without it, tailgating at Bobcat Stadium wouldn’t be the same.

It’s a FanBulance, specifically. This MSU tailgating institution has been owned by Rod Ganser and his wife Julie Ganser for ten years.

“My buddy actually found this over in Wilsall,” said Rod.

“It already had gold vinyl seats so it was just the right color.”

It’s specifically a FanBulance. Rod Ganser and his wife Julie Ganser have held this MSU tailgating spot for eleven years.

“I get a lot of cheers when the train horn goes off, the kids really love it,” said Rod.

“It was even in a wedding before,” said Julie. “It held the groomsmen and the wedding party.”

Rod and Julie have been tailgating in the same location for ten years as well. They used to have exclusive use of Lot 828, but this year they will be positioned just in front of the College Gameday stage on the practice field next to the stadium.

“I get this text that says ‘Hey College Gameday has this tailgate spot and want to know if you want to upgrade, so, I emailed them and they said, ‘You guys are on,’” said Rod.

Rod and Julie claim that displaying FanBulance makes them proud. They adore the bobcats and appreciate how joyful the FanBulance makes people. ‘The bigger the crowd the better,” said Julie.

Due to the 121st Brawl of the Wild, business at restaurants in Billings has increased

Can the Griz food drive at Montana State University collected the equivalent of 613,054 pounds of food