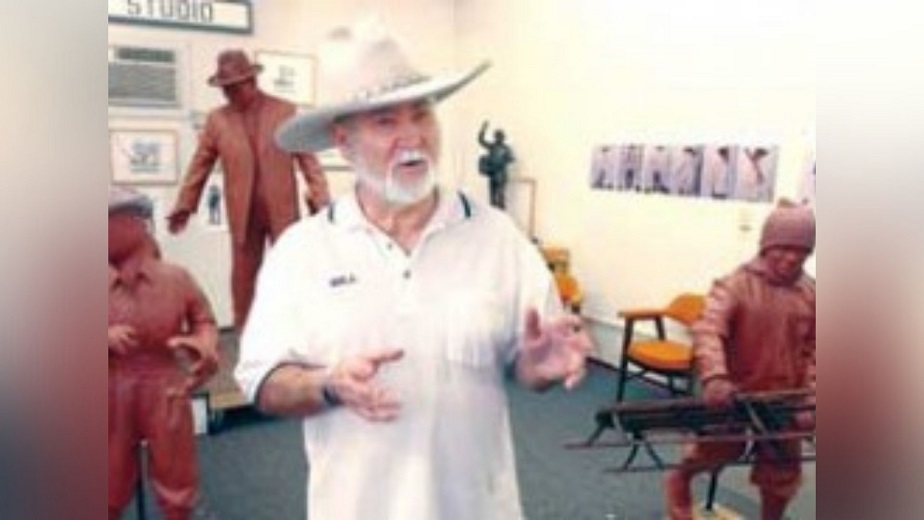 However, Rains’ work may be seen at sites like Graceland, the former home of the Grand Ol’ Opry, and Buck Owens’ Crystal Palace in Bakersfield.

Rains died at the age of 84 last week. Despite being vaccinated, his family believes he caught a Covid variant.

His skill was obvious from a young age.

“My Dad, as a boy, would do sketches and sell them in saloons down on Montana avenue,” one of Rains’ seven children, Jim said.

After leaving the Navy, Rains worked as a barber for ten years before quitting to pursue a career as a professional artist. He spent his life painting and sculpting landscapes, culture, and animals in Montana, but he also found a niche immortalizing many of country music’s biggest performers in bronze.

“He had grown up in Forsyth and was born in 1936, so they were a family of real humble means and his heroes were the people he would listen to in the Grand Ol Opry and their sequin suits and flashy lifestyles. They were like heroes to him,” said Jim.

Bill Rains would not only meet and become friends with some of those heroes—he sculpted statues of them that would be immortalized in bronze.

“Dad was friends with many of those people throughout his life. He didn’t meet every single one of them, but most of them he did. Willie Nelson, Johnny Cash. Johnny Cash loved the statue that Dad did of him.”

While he didn’t get to meet Elvis, Jim Rains says he owned several pieces of his father’s work.

Calvin Paulson cast hundreds of Rains sculptures into bronze at the Billings Foundry and considered Rains a good friend.

“Doing a bronze is a lot of work. The artist sculpts it, then we have to make a mold we have to pour wax and there is a lot of stages to do the process of doing the bronze, “said Paulson.

He recalls one time that Garth Brooks came to town to have Rains do a statue of him.

“He asked Bill, I’m going to propose to Tricia (Yearwood) when this thing is unveiled and he showed Bill a picture of the ring that he had and he had Bill actually sculpt the ring on his finger and when they unveiled the bronze, Tricia is going, what’s the ring for?”

The picture of Brooks proposing to his now wife under Rains’ bronze statue made headlines around the world and was even featured in People magazine.

Rains also had a great gift with a paintbrush, with much of his work capturing the beauty and western flavor of Montana.

His talent was evident in everything he touched—leaving a legacy that will live on.

His family and friends will celebrate Rains’ life in a memorial service at 1 pm this Saturday, Aug. 21 at the Heights Family Funeral Home and Crematory.