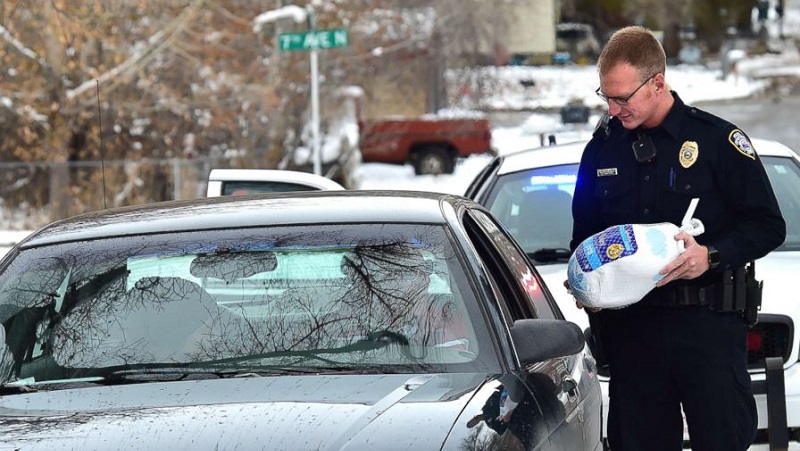 Billings, Montana – A surprise was in store for thirty folks in Billings for what they mistook for a traffic infraction.

However, they were given a turkey for Thanksgiving dinner rather than a ticket.

Sgt. Jeff Stovall was one of the officers who gave out turkey tickets and shared his morning experience, “when they see a police officer walking up, your normal response is to get a little nervous and think ‘ oh no what am I going to get a ticket for today?’ and once we go back up and they are all issued warnings for whatever violations they were stopped for and then they are presented with a turkey.”

From a gift made anonymously to Sam’s Club, the Billings Police Department ordered thirty turkeys to distribute to the neighborhood.

then distributed the chicken among the five officers.

B.P.D. believes that its distribution will give individuals a hot supper to enjoy with family and friends this Christmas season.

Stovall says the response, has been magical, ” It’s just been huge smiles from ear to ear, we’ve had people give us hugs some tears just a lot of thankfulness from the community.”

Because it’s impossible to predict when turkeys will change tickets once more, you might have to pay the cost the following time.

Firefighters in Billings provide advice for a safe Thanksgiving