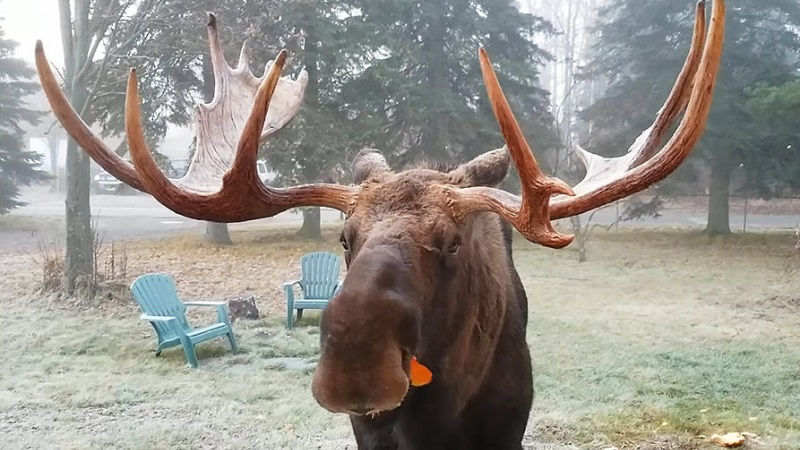 Billings, Montana – On Halloween night, a moose remained in the same spot in the backyards of a neighborhood close to where children were trick-or-treating.

Since its initial sighting more than three weeks ago, the moose has been observed numerous times.

One family claimed that while they were somewhat apprehensive, they were taking the same safety precautions as they would on any other Halloween night.

“Just have a good time,” said Winona Feldner, who spent Halloween with her husband and their seven children.

As of 7:00 p.m. the moose seemed peaceful and stayed nearby during the afternoon on Monday.

“With kids and people in the neighborhood, that moose could get upset about anything and then end up hurting somebody,” Feldner said.

He has been seen by the Feldner family during the day, so they are aware he is nearby.

“It’s probably the same alertness,” Feldner said about precautions for Halloween. “I mean, it’s Montana. There was a wild bear this summer too. So you just always have to be careful of animals and give them their space.”

On Halloween night, an adjacent neighborhood appeared to be empty.

“We don’t get a lot in this area,” Callie Jackson said. about trick-or-treaters in her neighborhood.

However, she also claims that the moose largely remained in an area close to some of the backyards.

Jackson and other others have seen that the moose is limping, probably as a result of an injury to his left front leg.

It looks to be a soft tissue injury, and Fish, Wildlife, and Parks speculate that this is why the moose has taken so long to depart Billings.

Biologists speculate that part of the stress may have contributed to him losing his antlers a little too early.

Although the FWP thinks a moose encounter is unlikely on Halloween night, they do advise staying vigilant and keeping an eye out for wildlife, including moose.

“Moose can be more active at dawn and dusk,” said Chrissy Webb, acting communications and education manager for FWP’s region five. “But, it’s hard to say what this guy has been doing.

Obviously, he’s in a different habitat than he would be in the wild, so his behavior could have changed a little bit.

“Wish he would go home because I’m afraid for his safety,” Jackson said.

“It’s not good for him to be running around here either doesn’t have all the food and everything that he needs to live,” Feldner said.