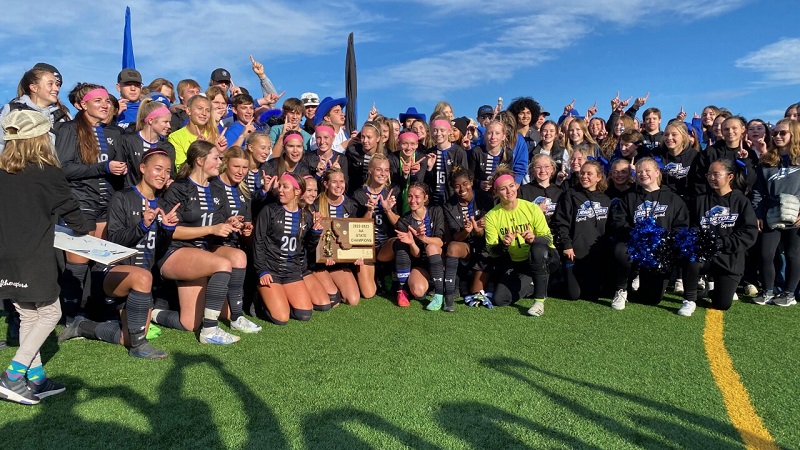 Bozeman, Montana — In their state championship game against the West’s third-seeded Missoula Sentinel Spartans, the unbeaten Gallatin Raptors entered eagerly to complete their season without a loss and exact revenge for their state title loss from the previous year.

As soon as Gallatin’s Olivia Collins split two defenders to score in the ninth minute, they were on the right track to scoring those two goals.

Indigo Andresen then curled it just inside the left post in the 38th minute to give Gallatin a 2-0 lead going into the break.

Peyton Schmauch scored off a corner kick to make it 2-1 less than two minutes into the second half, demonstrating the Spartans’ resiliency.

Olivia Collins would temporarily leave the game due to an injury, but fortunately, goalkeeper Averi Smith and the defense kept things in check without her.

In the 71st minute, Collins came back, and Andresen found her at the top of the box, where she scored her second goal and made the score 3-1.

“It’s such a good feeling,” Collins said. “It’s just like we’ve worked so hard for that and to see it finally pay off is just amazing.”

The season’s conclusion, according to head coach Joel Ganey, was well worth the wait and disappointment following last season’s championship game.

“What a fairytale story that it happened that way,” Ganey laughed. “We talked about it all season long and even before the game, one of our keywords was unfazed and we said ‘we need to be unfazed.’ Anything that happens this game, we need to be able to work through it and we’re going to be just fine and keep our heads and be professional about it.”

Gallatin wins a state championship in just their third year of existence.

The wolf at the Yellowstone Wildlife Sanctuary has passed away