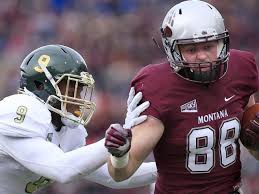 MISSOULA — Former Montana Grizzlies Dante Olson and Jerry Louie-McGee might not be finished with football just yet.

Olson and Louie-McGee, who played for UM from 2015-19, were named to the negotiation list of the Edmonton Eskimos, a Canadian Football League team. The Eskimos, whose GM is ex-Grizzly Brock Sunderland, now hold CFL rights to sign both of them as long as they keep the players on their negotiation list.

Olson had signed with the Philadelphia Eagles as an undrafted free agent in April but was waived before training camp ended. He capped his college career by being named the 2019 Buck Buchanan Award winner as the top defensive player in the FCS. He broke UM’s single-season and career tackles records, the latter despite being just a two-year starter following the return of head coach Bobby Hauck.

If Olson or Louie-McGee land in the CFL, they’ll join teammate Dalton Sneed, who signed with the Winnipeg Blue Bombers in March after a two-year stint as Montana’s quarterback from 2018-19.

Former Grizzlies Dave Dickenson and his brother Craig Dickenson are in the CFL as head coaches. Dave coaches the Calgary Stampeders, and Craig coaches the Saskatchewan Roughriders.

The CFL canceled its 2020 season on Aug. 17 because of the coronavirus pandemic.