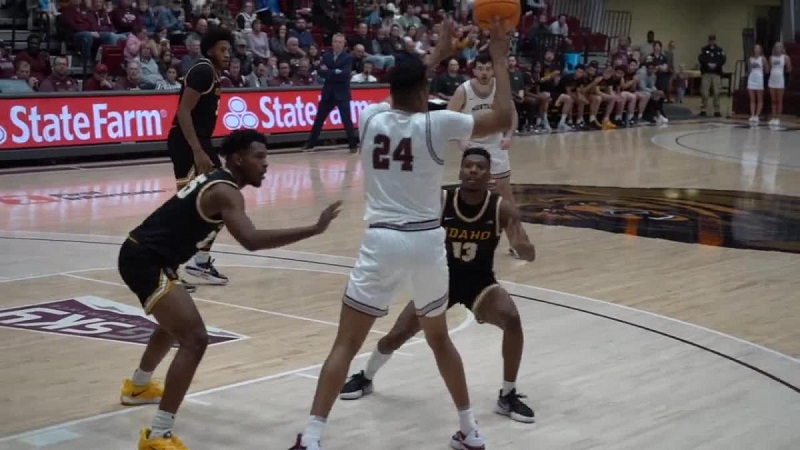 After a challenging performance against the Eagles on Thursday, Whitney rebounded by scoring 12 of UM’s first 15 points. Whitney made 8 of 15 field goal attempts, including 2 of 4 from beyond the arc.

“I thought we came out ready to play,” Whitney said. “We had to bounce back after our performance two days ago. I think we had a chip on our shoulder and we were ready to get one.

“Last game, I didn’t have a very good game. I was in foul trouble early so I knew I had to bounce back. This game against Idaho had been on my mind all night and it was even kind of hard for me to sleep after what happened the other night, so I think that was part of me coming out ready to play.”

“Obviously we were frustrated with Thursday, that was a tough loss, so it was important that we bounced back today,” Bannan said. “I thought energy was a bit better and we responded pretty well, but still a lot of ways we can get better.”

Before halftime, Montana had a 33-20 advantage after jumping out to an early 23-10 lead.

While Idaho made a late push, the Grizzlies (7-7, 1-1 Big Sky) were able to win their first Big Sky Conference game of the year thanks to a jumper from Moody and a 3-pointer from Vazquez with less than a minute remaining. Idaho finished the game with a record of 6-9 overall and 0-2 in conference play, paced by Isaac Jones’ 25 points.

The Griz turned the ball over just six times despite shooting the ball at a 43.1% clip from the field and going 7 for 21 from beyond the arc. Idaho, on the other hand, shot at a 34.8% field goal percentage, went 6 for 20 from three, and had 11 turnovers.

“Defense wins,” Griz coach Travis DeCuire said. “If you can hold your opponent to a low field goal percentage, you don’t have to be perfect offensively to win and that’s basically the difference between two games.

The minimum wage increased in 27 states on Monday, including Montana

Woman died on Jackrabbit Lane after being struck by a car