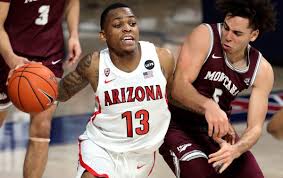 MISSOULA — For the third time this season, the Montana men’s basketball team will battle a Pac-12 foe Tuesday when the Grizzlies face Arizona at 5 p.m. (MST) in Tuscon.

It will be the third time UM and UA have played, but the second time in three seasons. Arizona stymied the Grizzly offense in 2018, with the Wildcats taking the game, 61-42.

Montana is 1-1 against Pac-12 teams this year, falling to USC in the season opener and beating Washington in Seattle last week. Montana is currently on a three-game win streak and sits at 3-4 on the season.

“I think what happens is that they start to realize what they’re capable of and how well they can play,” UM coach Travis DeCuire said on Friday following a win over Dickinson State. “But above and beyond that, when we’re telling them there’s a certain way to play, the right way for us, you need to have success for them to believe it, because none of them have been on the team in the past and see us do it.”

The win over Washington helped get rid of some of the bad taste an 0-4 start to the season brought, especially when considering Montana has already played two Big Sky Conference games, both one-point losses to Southern Utah.

Production and efficiency have improved over the three-game win streak, but Arizona will present a difficult task. The Wildcats have big guards, big forwards and a lot of versatile players who will present all sorts of matchup headaches for DeCuire and his staff.

Off the three bigs that Arizona starts — Jordan Brown, Dalen Terry and Christian Koloko — none are shorter than 6-foot-7 and Koloko is a true seven-footer.

Montana has struggled to stay out of foul trouble against larger teams this year and Arizona also pulls two other bigs, Bennedict Mathurin and Ąžuolas Tubelis, who are 6-7 and 6-11, respectively, off the bench.

It will be critical that Grizzly center Michael Steadman as well as forwards Josh Bannan, Kyle Owens and DJ Carter-Hollinger all stay at least partially out of foul trouble if UM is to pull its second Pac-12 upset of the season on Tuesday.

Montana’s defense has been very good this season — the Grizzlies are allowing just 61.3 points per game and rank 59th in the country in defensive field goal percentage with a mark of 38.7% — but will need to defend the paint without fouling.

“I feel like we’ve improved and come together as a group,” Bannan said on Friday. “We’ve got a lot of new guys and it took us a bit of time for us to find our identity and learn some new principles. But I think we’re just staying together and communicating at a pretty high level right now.

“We’ve just got each others’ backs and we’re rotating a bit better than we did at the start of the year.”

Arizona has hit from range at 39.3% clip this year, a mark that ranks 35th in the country. Hitting an average of eight three-point shots a game will be a difficult road for the Grizzlies to climb, especially considering UM’s 4.9 3-pointers made per game ranks 304th in the country.

Arizona is an efficient team but does turn the ball over and Montana will need to take advantage of any cold spells by the Wildcats to stay in the game. It was something they were not able to capitalize on against Georgia, but were able to against Washington and was a big reason for the upset against the Huskies.

UM has scored bunches of points in the paint and in the mid-range this year. Those shots will need to go down and the Grizzlies will have to hit a good percentage of their open looks to pull an upset over the Wildcats.

NOTES: The game is $70,000 buy game for UM … Arizona has already beaten two Big Sky teams this year, winning against Eastern Washington 70-67 and 96-53 over Northern Arizona.