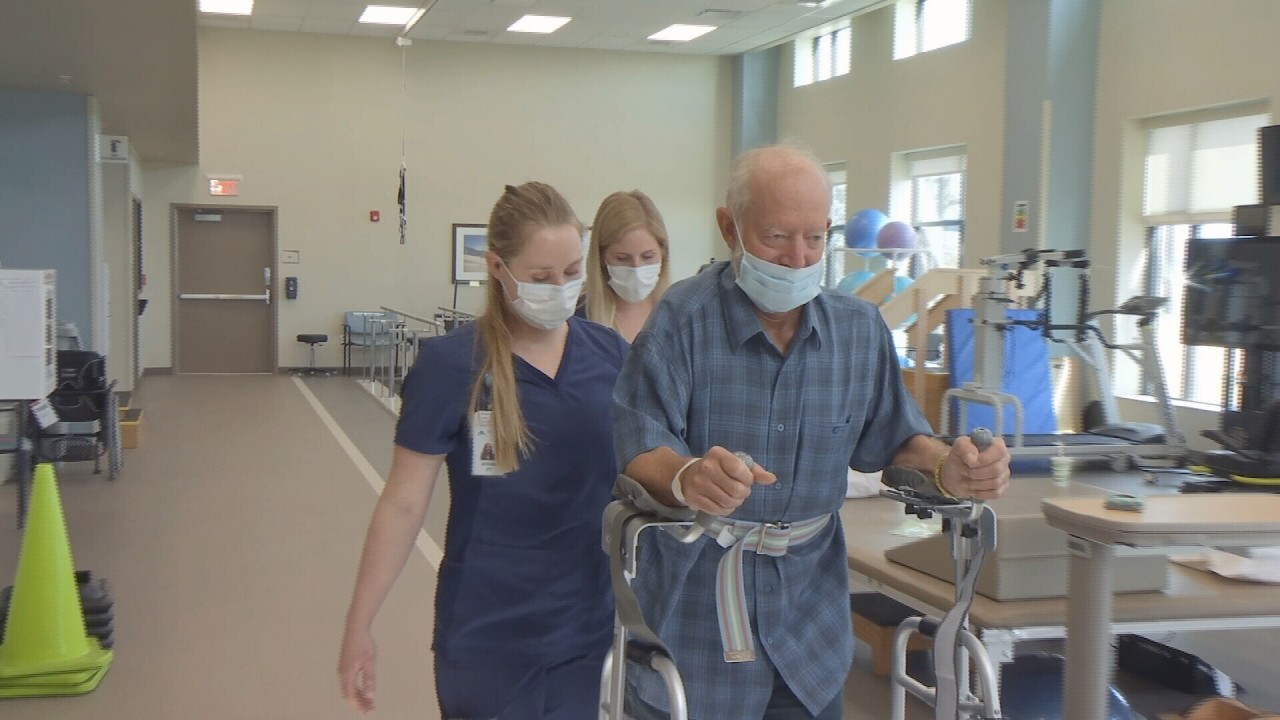 Last month, a motorcycle accident left a man from Powell, Wyoming, paralyzed and alone for 17 hours.

His doctor and one of his therapists say he is making progress in Billings and may have a full recovery.

Brad Meredith, 65, has been recovering at the Rehabiliation Hospital of Montana.

“So you only get three hours a day,” Meredith said. “And then you have to recover for the rest. So it doesn’t seem like you’re getting much therapy but that’s about what it takes to recover.”

“You have to stand up,” she said. “You have to turn. You’re in close quarters. You have to step in. So for someone to be able to just access a car by being able to get in and out with even one person helping is awesome. Then they have access to the whole community.”

Meredith will head back to Powell on Saturday and continue with some of the rehabilitation. But how close is he to 100 percent recovered?

“Probably, realistically, only about 30%,” Meredith said. “My normal activity level is pretty high. So I would venture to say, it would take a little while to get back to where I was doing.”

Meredith was not found for 17 hours after a motorcycle accident near his home in Powell on March 21.

“Before I knew it, I was on the ground,” Meredith said. “And I couldn’t feel anything because my arms and legs weren’t doing what I was telling them to do. I knew there was a neck injury. I just knew that I had talked to my wife and she knew pretty much generally where I was at. I had gotten cold that night, but I didn’t realize it because I couldn’t feel my lower extremities.”

Before arriving at the rehabilitation hospital on March 27, he had surgery at St. Vincent Health Care.

“I did a cervical fusion decompression and fusion,” said Dr. Louis Ross, St. Vincent neurosurgeon. “And he had very bad stenosis in his neck. So tightening around the spinal cord.”

“There’s a window of opportunity to really maximize your gains,” Ross said. “And the sooner you engage, the sooner and the more intensive you are with that engagement, the better the outcomes tend to be. Based on how he’s done so far in such a short period of time, if he has a 100% recovery, I won’t be surprised. “

“Brad’s mental toughness is definitely what pushes him through,” Grimstad said.

Meredith added, “So if I can get up and walk away from this and, go on and continue the quality of life, I think that’s a pretty, pretty lucky thing.”

The therapists say Meredith’s regular exercising has helped his rehabilitation.

The Rehabilitation Hospital of Montana is a partnership with Billings Clinic and St. Vincent Healthcare.