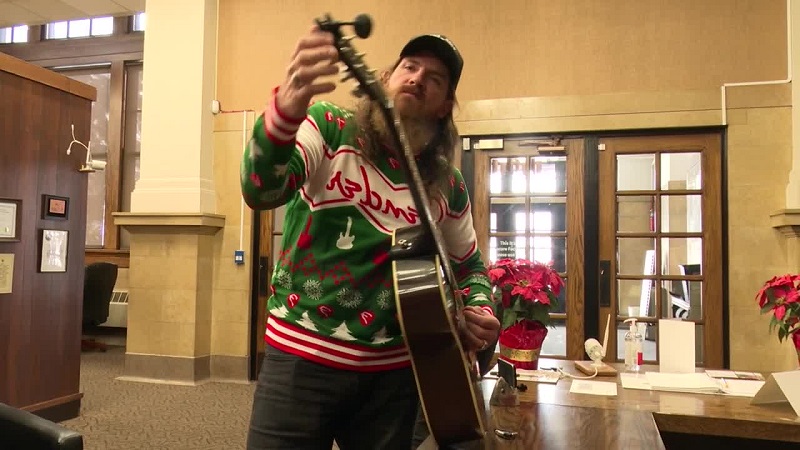 Butte, Montana – Living conditions were, to put it mildly, very basic for Tim Montana as he grew up in the rural area of Elk Park, which is located just north of Butte. His house had no electricity at all.

“Single-wide trailer house, with an addition. Still off-grid we’re solar power now, so you got electricity, but when I was a kid, we didn’t always have solar, so there’s lanterns, candles and a lot of people are like, ‘are you guys going green?’ And I’m like, no, it’s called poverty. Thanks for asking,” said Montana.

He picked up the guitar when he was six years old.

“I literally remember lighting a candle or a lantern in my room and I’d just sit there and bend the strings for hours,” said Montana.

“And now to be a professional songwriter and getting other artists cutting my songs is pretty cool,” Montana said. “When Travis Tritt recorded Smoke in a Bar, it was his first single in a decade and I got to go on tour with him and every night he’s like, ‘this is a song my buddy Tim Montana wrote for me,’ and I’m out there crying.”

He would develop a musical connection with a rock great in 2013 that would transform his career. How did they get along? “It was over a “Beard” song. I walked into a salon in Nashville to get my bread trimmed or something and there was a lady sitting there and said, ‘you look like ZZ Top,’ I said I hear that all the time. She goes, ‘I got a friend who knows Billy Gibbons,’ I said I hear that all the time too,” said Montana.

Since then, the two have worked together on a number of projects.

“Even back when I could get a record deal, I couldn’t get this or that, Billy was always there, and he’d always put me on tour with ZZ Top,” Montana said about Gibbons. “Anytime I’ve asked him to show up, or play on a song, or write a song, he’s done it. He’s just been that guy and everywhere I go with him people assume I’m his son, because we look so similar with the beards, so everywhere I go it’s ‘oh, that’s your son,’ and he’s like, ‘yeah, don’t let the truth get in the way of a good story.’ So, he kind of my rock and roll dad.”

More initiatives and excursions are being undertaken in Montana.

“I’ve got a lot of goals and it’s a work in progress, I’m not at the level yet that I always judge success by: Can I take a year off and come back everything will be the way it was? And I don’t feel I’m there yet. I’ve still got to keep grinding and grinding. But, I like the grind, I’m one of those guys if there’s nothing going on, I can’t stand it,” he said.

The new Billings airport director will start on January 16