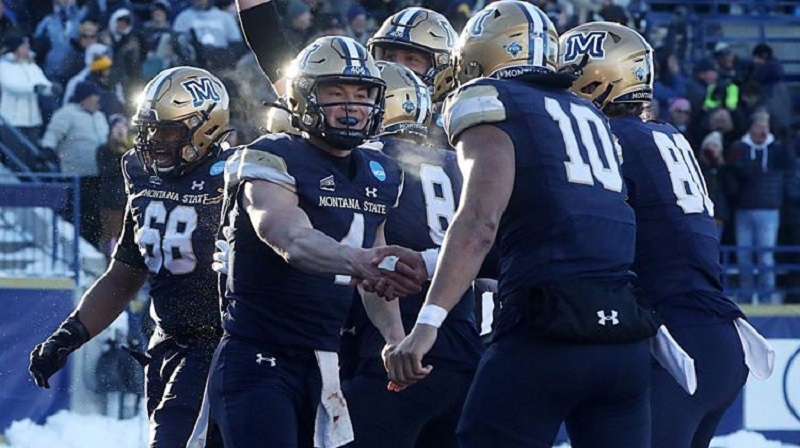 Bozeman, Montana – At Montana State, making it to the FCS playoff quarterfinal round has become routine, and the quarterback tandem of “Big Cat” and “Little Cat” made sure this season was no exception.

At Bobcat Stadium on Saturday, MSU defeated Weber State 33-25 in an FCS playoff game after Tommy Mellott, aka Little Cat, raced for 158 yards and threw for 91 yards, while Sean Chambers, aka Big Cat, threw two touchdown passes and ran for another.

The two teams had previously played in a tense clash on Oct. 22 in Bozeman, which the Bobcats had won 43-38. Despite a rough ending, Mellott and Chambers pushed the Bobcats to a 23-point advantage that was simply too large for Weber State to overcome after their first encounter.

“Obviously there were a bunch of big plays in the third quarter to open it up, and we ultimately finished but it wasn’t as pretty a fourth quarter,” MSU coach Brent Vigen said during a postgame press conference. “But the end result is the end result, we got a win and we move on.”

On a 2-yard run in the first quarter, Chambers scored MSU’s first touchdown, giving his side a 7-3 lead. He also connected with tight end Derryk Snell for a 28-yard touchdown pass in the third quarter, and in the fourth, he connected with Willie Patterson for a 47-yard reverse flea-flicker.

That was a part of a run of 23 straight points by MSU, which served as a comfortable buffer. Chambers threw for 75 yards and ran for an additional 92 yards.

Mellott, on the other hand, was as slick as always when it came to running. Mellott ran the ball 22 times for an average of 7.1 yards. Mellott made 13 out of 19 completions in the passing game.

The Bobcats carried for 388 yards as a team, with 91 of those yards coming from running back Isaiah Ifanse, who was back in the game after being out for over a year recovering from knee surgery.

Weber State wasn’t a silent victim. The Bobcats were able to win the game on the strength of their rushing attack on the last possession despite the Wildcats scoring two scores in the fourth quarter on throws of 31 yards from backup quarterback Kylan Weisser to Jon Christensen and an 8-yard connection from Weisser to Hayden Meacham.

“There certainly were ebbs and flows in that game,” Vigen said. “Defensively we gave up the early score, then really played well for a couple of quarters. Offensively we were pretty steady, but we were kicking field goals instead of touchdowns.”

Willie Mack Garza, the defensive coordinator at MSU, was absent because he is suspended following his arrest for DUI in Bozeman two weeks ago. In their defense against Weber State, the Bobcats restricted the Wildcats to just 317 total yards and forced a turnover under the direction of linebackers coach Bobby Daly.

The victory marked Montana State’s 19th consecutive home victory and advances the team into the quarterfinals for the third time in the last four years, with the exception of the pandemic-related non-season in 2020.