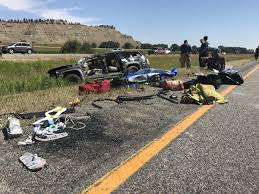 LIVINGSTON, Mont. — A semi-truck was involved in a fatal crash killing two people on Interstate 90 east of Livingston on Sunday. Montana Highway Patrol says this makes the 13th and 14th fatalities on a Montana highway this year.

According to MHP, they received a report around 1:18 p.m. the truck was driving westbound on I-90 between Elton and Livingston.

For reasons that are unclear, the truck veered off the left side of the highway, crashing into the divider and continuing straight into a department of transportation fence. The truck flew into the air and into an embankment on the opposite side of underpass, detaching from its framework.

A woman was ejected from the semi and was pronounced dead at the scene. A seat was also ejected with a man still in it, he died some time after.

MHP says speed is considered a factor, but road conditions, alcohol and drugs are not.

This is an ongoing investigation and the identities involved have not been released.