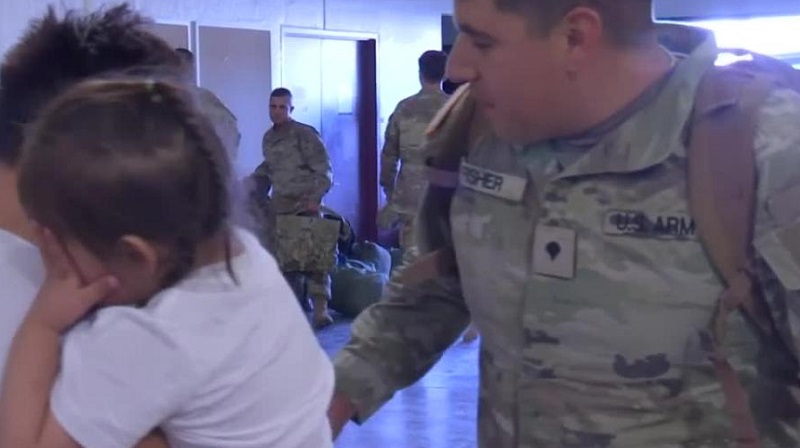 Crow Agency, Montana – A Crow soldier returned home on Friday after a year-long assignment in Kuwait and Syria, and it was a homecoming suitable for an American hero.

At the Crow multipurpose facility, Specialist Vernon Fisher Jr., who left his family when his youngest kid was just 10 months old, was reunited with them on this very memorable Veterans Day.

The Crow Tribe welcomed back four soldiers, including Fisher, and also performed a ceremony to commemorate all veterans.

The soldiers, their families, and the tribal people all value veteran honor.

Fisher often daydreamed about reuniting with his wife Eva and their three young children.

“They don’t recognize me, so (they) have to get used to me again,” Fisher said.

That is a fact of post-deployment life.

“We had a conference call with some of the other families who have been deployed before,” said Eva Fisher. “And the expectations of when they come back and they said don’t be surprised if your kids don’t know him.”

Eva couldn’t wait to embrace her husband after more than a year apart, though she knew that getting used to life in Montana again would take some time.

“I never realized how much of a presence he made while he was home,” she said.

And Fisher’s neighborhood values it highly.

He was one of the 350 members of the 1-163rd Combined Arms Battalion and the 631st Chemical Company that served from the start.

On Thursday, Fisher was the lone Crow soldier who made it back to the center.

“Fourth or third generation soldier, so it’s always been in my family,” Fisher said.

“It’s part of our culture, we want to honor them,” Eva said.

The Crow tribe also honored the contributions of four warriors on Friday.

Because to the roads, Justin Zier, a fourth soldier expert, was unable to attend.

“A combat veteran of the Crow Tribe is going to blacken their cheeks,” said Dale Old Horn, advisor on cultural affairs to the Crow chair. “The blacking cheeks is a symbol of victory and war.”

Since they were children, all four of them served in the same unit and had witnessed the warrior ceremony.

“Went on our party and we came back and no one got hurt,” Fisher said.

Author talks about the background of midwives in Montana