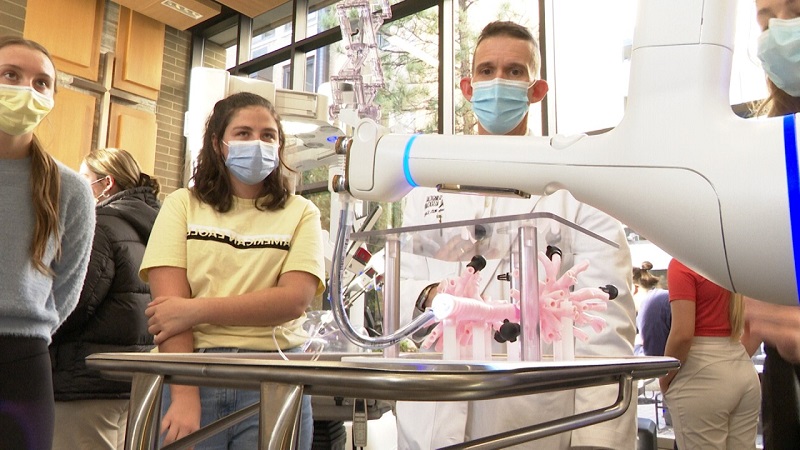 Billings, Montana – Aspyn Bowman has great plans for her career. “I think surgery. It’s really interesting to me,” she said.

Before Monday, Bowman, a student from Billings West who is enrolled in the course of a medical occupation at the Career Center, may have just been leaning toward being a surgeon, but she may now be decidedly in the lead.

“I just always thought of it as the open procedures,” Bowman said, “but seeing all the possibilities that are coming out is very exciting.”

At St. Vincent Healthcare, the medical careers class had first-hand experience using two different surgical robots. One of them was the DaVinci, which allowed the user to virtually control small instruments from several feet away. It has been used by surgeons at St. V for a variety of operations.

The Ion, a camera-based robotic that is making lung cancer diagnoses more precise than ever, was the real star of Monday, though.

“This robot lets us get to spots in the lung we’ve never seen before,” said St. Vincent’s registered nurse Kristen Ronquillo.

Ronquillo is passionate about the lung program and has been a strong supporter of this innovative technology, the first of its type in Montana. It has already been utilized by two surgeons, including Rentz, which is timely given that November is Lung Cancer Awareness Month. Lung cancer, which accounts for 25% of all cancer deaths in the country, is the most common cancer among Americans, according to the American Cancer Society. Lung cancer claims more lives each year than colon, breast, and prostate cancers combined. Unfortunately, most lung cancers are only discovered after symptoms start to appear.

“Recently, up to 80 percent of people with lung cancer were already incurable at the time of diagnosis,” Rentz said. “But with early detection through CT scans, some places have been able to lower that to 50 percent of people.”

Following the scan, the Ion can determine whether a lesion is malignant, and the DaVinci can then remove it within the same process.

“This is the best we have in 2022 to bend the curve on lung cancer mortality,” Rentz said. “And I think we’re going to see it to grow beyond the lungs. But this is a wonderful step forward.”

A wonderful union of the tech users of the future and the technology itself.

Due to the significant snowfall, Big Sky Resort begins the ski season one day earlier